Time to look at March's polling. Nine national polls were taken during this month (three fewer than last month), totaling about 18,550 interviews. Here are the results we get at the national level, with the difference from last month's average in brackets.

The Conservatives have another month of gain, totaling a gain of 0.9 points since January. The Liberals show a large drop after making steady gains, and are back below 30%. The NDP makes a good gain, while the Greens remain steady and the Bloc makes a tiny national gain. 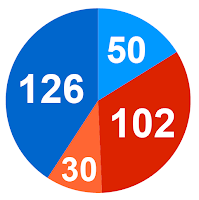 The Conservatives make a seat rebound, but are still in weak-minority territory. The Liberals take a step backwards, while the Bloc and NDP take small steps forward. 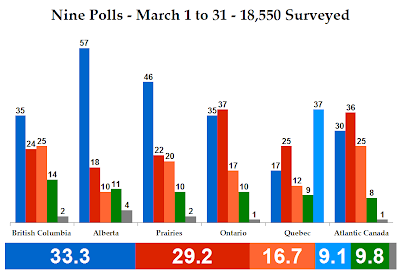 The Conservatives are up in the province, but still well below where they want to be. The Liberals make a big two-point drop, and are now in third place in the province behind the NDP, who are steady. The Greens make a good gain.

The Conservatives make a big gain in their stronghold, while the Liberals drop. However, this drop is about as much as their gain in February, so it may just be a bit of a reset. The NDP have dropped a total of 1.1 points in the last two months, and have relinquished third place to the Greens, who are up 0.8 points.

The Conservatives drop a little in the Prairies, but are still well in front. An interesting note about Tory performance in the province: there was incredibly little variation. Despite the small sample sizes in the region, every pollster had the party at around 46%. The Liberals are up a little, a gain of 2.5 points in the last two months. The NDP is down again, dropping to third as the party loses 3.2 points in two months.

In all, the Conservatives take 67 seats in the West, one more than in February. The Liberals win 17 (one less) and the NDP win 11 (unchanged).

The Liberals drop, erasing a 0.7-point gain in February. However, they maintain the lead as the Tories gain only 0.5 points. The NDP makes a huge gain, while the Greens lose a point.

As expected, the Bloc erases the losses suffered in February. The Liberals take a big step backward, while the Tories take a small step forward. The NDP is up a little, but they were down about that much in February.

The Liberals are down, back to where they were in January. The Tories are also down to where they were at the beginning of 2010. The NDP is making up some of the ground lost in a disastrous February, while the Greens continue to lag well behind.

The Liberals win 20 seats (unchanged), while the Conservatives win 8 (unchanged) and the NDP wins 4 (unchanged). 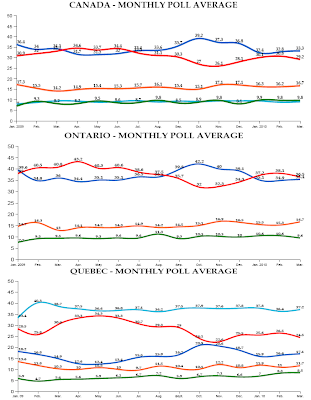 March was good to the Conservatives, who make gains in four of the six regions. Their losses in the Prairies are relatively unimportant, considering their overall strength, and the Atlantic region was never going to be strong for them. Rebounding in Ontario, Quebec, and British Columbia is very important.

The Liberals, on the other hand, had a very bad month. They dropped in five regions, including losses of two or more points in Atlantic Canada, Quebec, and Alberta. Their losses in British Columbia and Ontario were also significant. In light of these numbers, their tiny gain in the Prairies is little comfort.

The NDP had a terrific month, gaining in three regions and remaining steady in one. Their gain in Ontario is very important, and showing life in Quebec and Atlantic Canada is good news as well. Something needs to be done in Alberta and the Prairies, however.

The Bloc had a decent month, but are still below their 2008 electoral support level.

The Greens made gains or were stable in all six regions, but are still not in a position to win any seats.

March's winner has to be the Tories, as they made important gains in important regions, and have opened up a decent little lead nationally. The silver medal would go to the NDP, but the Liberals take home the title of March Loser.
Posted by Éric at 9:14:00 AM