EKOS's weekly poll indicates that while the recent scandals and issues have weakened the Conservatives, it hasn't dragged them down. 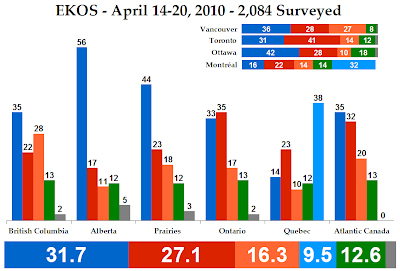 EKOS points out that in the wake of the Guergis scandal, the Liberals and Conservatives were polling at a tie. But over the last week, things have normalized and the Liberals have falled back 1.9 points to 27.1%. The Conservatives are up 0.3 points to 31.7%. That is still way too low for the governing party.

In British Columbia, the Conservatives are moving back into a comfortable lead, up two points to 34.7%. The NDP is up four to 28.1% and the Liberals are down four to a troublesome 21.6%. The Greens are steady at 13.3%. The Conservatives lead in Vancouver with 36.2%. 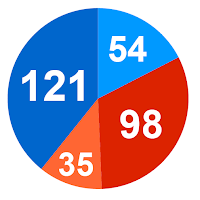 The Conservatives would win 66 seats in the West, 39 in Ontario, 4 in Quebec, and 12 in Atlantic Canada for a total of 121 seats. That dismal result in Quebec hurts.

The Bloc wins 54 seats, matching their all-time best. They really just have no competition.

The big thing to take away from this poll is that all of the brouhaha in Ottawa is not having much of an effect, other than to disillusion enough Canadians to make either one of the two major parties the choice of less than 1/3rd of Canadians. A governing mandate built on such a low level of support would be difficult to justify.
Posted by Éric at 8:34:00 AM