A new biased EKOS poll shows the Conservatives up and the Liberals down to disastrous lows. Money well spent, Liberals! 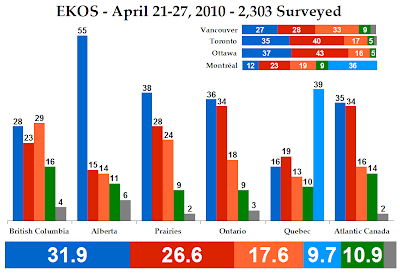 Many of the results of this poll echo that of Harris-Decima, indicating that perhaps the NDP has indeed gotten a boost.

And while I still have your attention, commenter AJR79 don't skip over last night's blog post.

In British Columbia, the NDP is up one and leads with 28.6% (much like the HD poll). The Conservatives are down seven points to 28.4%, while the Liberals are up one to 22.7%. The Greens are up three to 16.1%. The NDP has moved into the lead in Vancouver with 32.5%, as the Tories are down nine points there.

Elsewhere, the Conservatives have a narrow lead with 34.9% in Atlantic Canada and a not-so-narrow lead in Alberta with 54.4%. There was a lot of movement in the Prairies, where the Conservatives drop six to 38.2%, the Liberals are up five to 27.5%, and the NDP is up six to 23.8%. 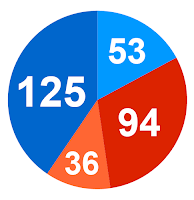 EKOS also looked into 'second choice', which I absolutely love.

The NDP is the Liberals' second choice, at 36.3%. Next was none (24.8%) and then the Conservatives (20.2%). This is an indication that the party's supporters are leaning more towards the left.

Now, the Other. This is the interesting thing. For these supporters, 43.3% have no second choice and 23.4% choose the Greens. This is a big indication that 'Other' support is, indeed, "none of the above". You would expect CHP supporters to go Conservative, and Communist/Marxist supporters to go to the NDP, etc. But instead, these respondents simply don't want to support the major parties.

This doesn't necessarily mean the "Other" result is false. Perhaps these people will actually vote for some other party come election time. More likely, though, is that they will not vote at all or will make a decision come election time.

The poll also looked at the approval ratings for the leaders of the three major parties, and also the American President. Let's start with him. Fully 70% of Canadians approve of Barack Obama's performance, compared to only 12% who disapprove. Move to Canada, Barack!

For Michael Ignatieff, the split was 20% to 51%, an even more negative result. His worst came in Alberta (16%) and his best came in Atlantic Canada (25%). Can you see the bias inherent in the system?

Ignatieff still has a lot to do to demonstrate to his own supporters that he is the leader for them. While 45% approve of his performance, 30% don't.
Posted by Éric at 8:49:00 AM