Ipsos-Reid has a new poll out, showing some small movement but nothing earth shattering. 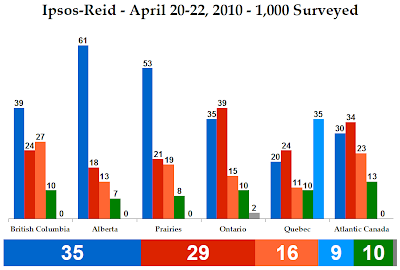 Compared to Ipsos-Reid's last poll taken in early April, the Conservatives have dropped two points to 35% while the Liberals are up two to 29%. The New Democrats are up one to 16% and the Greens are stable at 10%.

These are small movements, but seem to indicate that the recent scandals in the news with Jaffer and Guergis have only put a small dent in the party's standings.

Where it does seem to have hurt is in Ontario, where the Conservatives are down four points to 35%. The Liberals are up three to a very good 39%. The NDP is up one to 15%.

In Quebec, the Bloc Québécois is down seven points to 35%, but still well ahead of the Liberals at 24% (up one). The Conservatives are steady at 20% and the NDP is up four to 11%.

In British Columbia, the Conservatives have dropped seven to 39% while the NDP is up seven to 27%. The Liberals are also up, five points to 24%. The Greens are down four to 10%.

In the other regions, the Liberals lead in Atlantic Canada with 34% while the NDP has dropped ten points there. The Conservatives are well ahead in Alberta with 61% and in the Prairies with 53%, though that latter result is a drop of six. 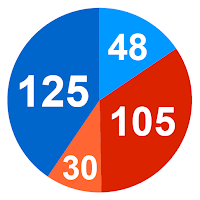 The Bloc wins 48 seats in Quebec.

This is generally a repeat of the 2006 election.

A brief comment about Frank Graves and EKOS. While Graves' comments have been somewhat unfortunate, (and leaving aside the fact that virtually all pollsters give "advice" to the parties in their analyses) there is no reason to believe that their numbers and their methodology are suspect. Professionals are able to separate their work from their personal views, and there will be no change in how I see their numbers until something comes up which puts the work that EKOS does into question.
Posted by Éric at 11:21:00 AM