Angus-Reid recently released a new poll on provincial voting intentions in British Columbia. There isn't much change, but the trend is in the BC New Democrats' favour. 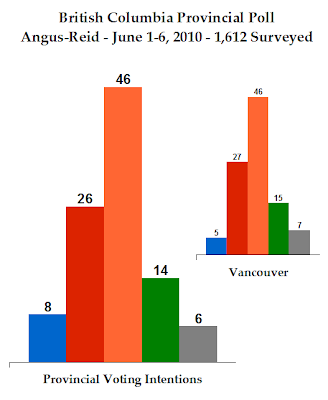 Compared to Angus-Reid's last BC poll in mid-April, 46% is a gain of one point for the BC NDP. More importantly, the BC Liberals have dropped three points to 26%. That would be their lowest electoral result since 1986.

The BC Greens are steady at 14% while the BC Conservatives are up three points to 8%.

We can't compare apples to oranges, but the Mustel Group's May BC poll had the BC NDP at 44%, the BC Liberals at 32%, the BC Greens at 13%, and the BC Conservatives at 7%. While we can't compare the results, it does serve to help confirm Angus-Reid's findings.

On Vancouver Island, the BC NDP also leads, with 54%. This is their best regional result. The BC Liberals are way behind with 18% while the BC Greens are at 16% there.

In the Interior, the BC NDP leads with 43%, followed more closely by the BC Liberals at 30%. The BC Conservatives are in third here with 16%, their best regional result.

Still another three years until the next BC election, but a steep hill for Gordon Campbell and his BC Liberals to climb. The HST, which seems to be the driving issue against Gordon's government, might be forgotten by 2013.

(Ipsos-Reid's poll from Saturday will get a post either today or tomorrow, while Léger Marketing's Quebec poll released today will also get a look this week.)
Posted by Éric at 9:24:00 AM