EKOS's weekly poll shows some Conservative weakness and Liberal growth, but nothing spectacular in terms of movement. 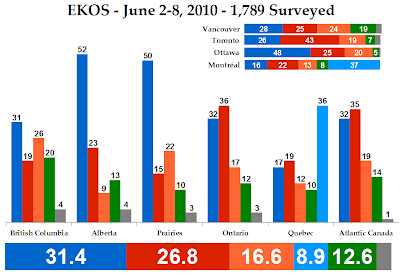 In British Columbia, the Conservatives drop three to 30.8%. The NDP and Liberals are down one each, to 26.0% and 19.0%, respectively. The Greens have moved up into third place with a three point gain. They now stand at 20.2%, a terrific result for them. The Conservatives have a slim lead in Vancouver with 27.6%.

The Liberals lead in Atlantic Canada with 34.7% and the Conservatives lead in Alberta with 51.9%. In that province, the Liberals are up six to 22.7% while the NDP is down five to 8.7%. 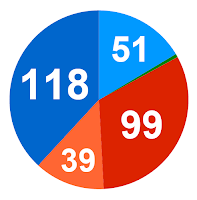 A bad poll for the Tories, a relatively good one for the Liberals, NDP, and Greens. With a combined 139 seats, a rainbow coalition of Liberals, the NDP, and the Greens would be possible. With a loss of 25 seats for the Conservatives and gains by all three parties of this coalition, it would be difficult to argue that it would be a "coalition of the losers".

In such a scenario, the Bloc would be in a powerful position - or would they? The RC (rainbow coalition) would have to be smart enough to not invite the Bloc, but also not upset them. So, we'd likely see a budget without any poison pills, and maybe even one or two out-reaches, and the RC government would muddle about for a year or two.

And then it could go one of two ways. On the one hand, support for the government could tank, giving the Bloc reason to defeat it and make gains in Quebec. Perhaps a Conservative majority would be the result. While a government like that would be anathema to the Bloc's social democratic views, it would likely be a boon to sovereigntism in Quebec, just when the Parti Québécois would be set to replace the provincial Liberals.

On the other hand, my gut tells me that this kind of progressive coalition would find support in Quebec, dropping the Bloc to the low-30s in support. This would make the Bloc nervous, and push them towards supporting the government. The RC coalition, knowing that their support in Quebec is one of their lifelines, would not introduce any legislation that would raise the ire of Quebecers and put the Bloc back into a dominant position.

So, it would be a gamble. It could go either way, but what is not a certainty is that the Bloc would be given a "veto". Their relative power would depend entirely on the policies set forth by such a government, and they could turn out to be far more stable than the minorities we've seen under Paul Martin and Stephen Harper.
Posted by Éric at 9:56:00 AM