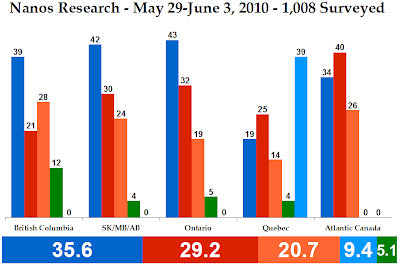 Compared to their last poll at the beginning of May, the Conservatives have dropped 1.6 points to 35.6%, which is still not a bad number. The Liberals drop four points to 29.2%, while the New Democrats make a big 4.5-point jump to 20.7%. We rarely see such huge swings from poll to poll.

In Ontario, the Conservative jump six points to an incredible 43.2%, taking the lead from the Liberals, who must've clubbed a seal as they've dropped eight points to 32.4%. The NDP is up two to 19.1%.

In Saskialbertoba, the Conservatives are down 13 points to 41.7%, but lead. The NDP jumps 10 to 23.9%. Nanos continues to bunch Alberta, Saskatchewan, and Manitoba together, making it impossible to compare these numbers to any other poll or use them in my projection.

UPDATE: The undecided in this poll is 24.2%, two points up from last month. Not a huge shift, despite the variations in support.

For Alberta and the Prairies, I've used the seat projection at the top of this page. 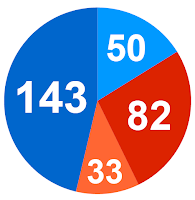 The Bloc wins 50 seats in Quebec.

The NDP win 14 seats in the West and North, 14 in Ontario, 1 in Quebec, and 4 in Atlantic Canada for a total of 33. You may be wondering why they drop in seats despite being over 20%. But their result in BC is nothing spectacular, the Liberals and Bloc are too strong in Quebec to give them an inch, and gaining a point in Ontario does little when the Conservatives are so high.

An interesting poll with a lot of big numbers, but as usually Nanos stands out from the crowd. They, like Angus-Reid, do not prompt the party names in their questions. This seems to lower the Greens quite a bit, which then makes the other numbers look a little different from what we're used to seeing with EKOS and Harris-Decima. But are the Conservatives really at 43% in Ontario? Are the Greens at 0% in Atlantic Canada? There's nothing especially egregious in this poll, but some of these numbers need to be shaved down a little.
Posted by Éric at 5:19:00 PM