Harris-Decima has a new poll out today, showing that the Conservatives are down a little nationally but up in Ontario. 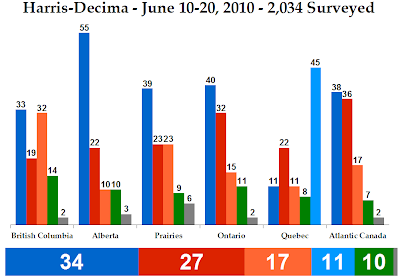 Harris-Decima's last poll taken in mid-May had the Conservatives at 36%, so this is a drop of two points. The Liberals are steady at 27%, while the New Democrats are up one to 17%.

The Bloc Québécois is up three points to 11% and the Greens are down one to 10%.

In Quebec, the Bloc soars ten points to 45%. While such a jump would be strange, the Bloc has actually been polling very well lately. The Liberals are down four to 22%, as are the Conservatives to a woeful 11%. The NDP is down one to 11%. The Bloc is in full control.

In British Columbia, control is being hotly debated. The Conservatives are down six points to 33%, only one up on the NDP, who are up five to 32%. The Liberals are also up: two points to 19%. The Greens are down one to 14%.

The Conservatives lead in Atlantic Canada with 38%. The NDP has dropped seven points there. The Tories also lead in Alberta with 55%, and in the Prairies with 39%, though that is a drop of eight points. The Liberals are up six in the Prairies. 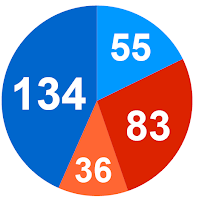 The Bloc wins 55 seats in Quebec, a gain of seven.

While the gap is certainly good news for the Conservatives compared to some other polls we've seen, 34% is still low - and 11% in Quebec is catastrophic. However, the lead in Ontario is something they'd like to see.

We're heading into the summer without much of a story line. The Conservatives are down and the Liberals are stuck. Maybe the only big piece of news is that the Bloc is back. On the 20th anniversary of the failure of the Meech Lake Accord, perhaps that is fitting.
Posted by Éric at 3:50:00 PM