A new feature of the site, if it can be called a feature, is that at the beginning of each month I look at the best case scenarios for each party. You can look at April's post here.

What I've done is taken each party's best projection result in each region (West, Ontario, Quebec, Atlantic Canada), and taken these best results to get a national, best case projection based on polls from last month.

In other words, these projections are the best possible result each party could've gotten had an election taken place in the month of May.

We'll start with the New Democrats. 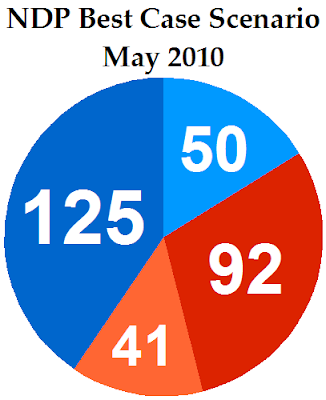 While 41 seats (and 20.3% of the vote) would be an excellent result for the NDP, this is actually quite a dip from April. Then, their best case scenario was 50 seats. The major benefactor from this NDP dip has been the Conservatives, who would win 125 seats in this scenario rather than 109.

Despite this drop, this would give the NDP and Liberals 133 seats and gains of four and 15 seats, respectively, compared to a loss of 20 seats for the Conservatives. Coalition of the losers?

Next, the Liberals, who had a gain in seats but a worsening of situation. 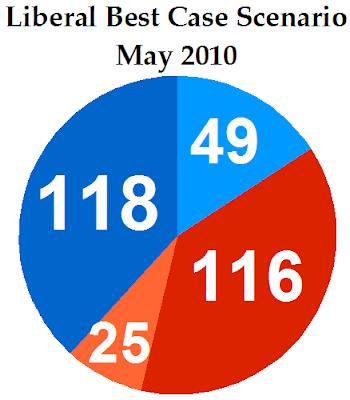 The Liberals win 116 seats in this best case scenario, three better than in April. But the Conservatives win 13 more seats for 118 in all. This gives them a slight edge over the Liberals.

The 25 seats won by the NDP (down from 35 in April) makes this a trickier situation, but nevertheless 116 seats is a step up.

They are still well away from forming a comfortable minority government, which is bad news for the party. Even if all their cards fall right, they still won't win more seats than the Tories.

The good news for them, though, is that the Conservatives have moved away from majority territory. 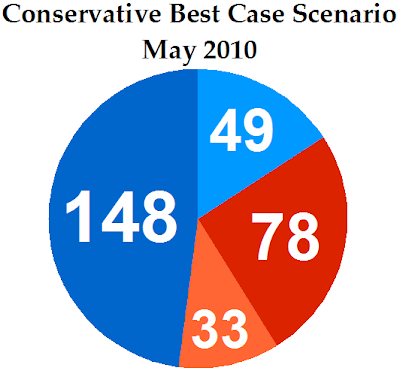 The best case scenario for the Conservatives in May was 148 seats, down 11 from last month's majority result of 159. The NDP benefits most from this, going from 23 seats in the Conservatives' April best-case-scenario to 33.

One thing this shows is that May was, actually, a bad month for everyone. The numbers worked their magic to steal seats from the Tories, despite having a decent month in terms of polling support. But, of course, a great result in a province is only great if a party's opponents do badly as well. Results need to be looked at as whole, not individually.

The Liberals actually gain a few more seats in this calculation, but the Tories gain more and the Liberals are bumped into second place. And the NDP go down from a historic best to a modest improvement over 2008.

The only positive is from an opposition perspective: the Tories do not look set to win a majority, or even have a chance at one.
Posted by Éric at 8:59:00 AM