Ipsos-Reid released a new poll on the weekend, and it shows relative stability - though also a small drop for the Liberals. 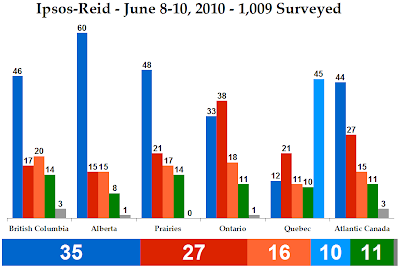 Compared to their last poll at the beginning of May, the Conservatives remain steady at 35%. The Liberals have dropped two to 27% while the New Democrats are stable at 16%.

The Greens are up two to 11% and the Bloc Québécois is holding at 10%.

In Quebec, the Bloc is up six points to 45%, followed by the Liberals at 21% (down two). The Conservatives fall away to 12%, down seven points. The NDP is down two to 11%. While this is a big number for the Bloc, they have been trending upwards across the board.

Then we get into very small sample sizes, demonstrated by the Tories' 11-point gain in Atlantic Canada, where they lead with an improbable 44%. The Liberals drop eight to 27% and the NDP drops ten to 15%.

The Conservatives lead in the Prairies with 48%. The NDP is down six to 17% here. 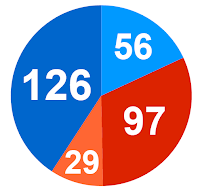 The Conservatives win 75 seats in the West, 35 in Ontario, 3 in Quebec, and 12 in Atlantic Canada (they smack hard up against the ceiling here) for a total of 126.

The Bloc wins 56 seats in Quebec, their best ever.

Significantly, the Liberal-NDP total is 126 seats - tied with the Conservatives.

But then this brings up the topic of a merger, which Ipsos-Reid has kindly investigated.

But we seriously need to question whether any of this merger talk is anything more than that - talk. The Canadian Alliance and Progressive Conservatives were different sides of the same coin, and it made sense for them to merge. The Liberals and NDP are very different. One is, well, a liberal party and the other a social democratic party. Those are not different sides of the same coin.

Of course, it is possible that a merged Liberal Democrat Party would have the same kind of success that the Conservatives did: a significant drop in combined support in their first election, and electoral wins afterwards. But the difference is that, unlike in 2004, a merged Liberal Democratic Party would not be able to depend on vote-splitting and a multitude of parties to keep the main opposition to a minority. There would be a serious risk that the merged party's first election would end in a Conservative majority - which would sort of defeat the point.

The solution is co-operation, like we're seeing in Great Britain. Talk of mergers is silly, the two parties are very different. A great number of Liberals will not vote for a party including the NDP, and a great number of Dippers will not vote for a party that includes the Liberals. We'd likely see a boost in support for the Tories on the one hand and the Greens on the other.

What Michael Ignatieff and Jack Layton need to do is talk about possible future co-operation if the Conservatives can't form another viable minority. Perhaps even have an unofficial non-aggression pact, keeping the majority of their electoral attacks reserved for the Tories. Maybe the two parties could even agree not to run candidates in ridings where vote splitting is a real problem. That doesn't mean a riding like Gatineau, where the Liberals and NDP both had over 25%, but ridings like Saskatoon-Rosetown-Biggar, where the Conservatives won with 45% to the NDP's 44%. The Liberals had only 4% support there. In situations like these, the Liberals or NDP could step aside and give the other party a better chance, without seriously hurting their own party's morale.

Co-operation needs to be the slogan of the NDP and Liberals in the next election. Canadians want co-operation. They don't want the kind of bickering, partisan parliament we currently have in Ottawa. And co-operation doesn't mean between the Liberals and NDP only. Just co-operation. Mature, sober decision-making between parties. Ignatieff and Layton just have to talk about co-operation and about improving the tone in Ottawa and the way politics are done. Canadians would be receptive to that, and it leaves the option of either collaboration or coalition on the table.
Posted by Éric at 9:37:00 AM