Forget percentages - what about real votes?

As this blog concentrates on polls, we're always dealing with percentages. Sure, the parties that receive the highest percentage of votes cast wins, but it is those real votes that decide elections. And, they are probably the best barometer of a party's political support over the years.

This chart shows the amount of actual votes each party received over the last three elections. As you can see, both the Conservatives and New Democrats saw gains between 2004 and 2006 but losses in 2008. The Liberals and Bloc Québécois lost votes in each election, while the Greens were the only party to show steady growth in the face of ever lower turnout. 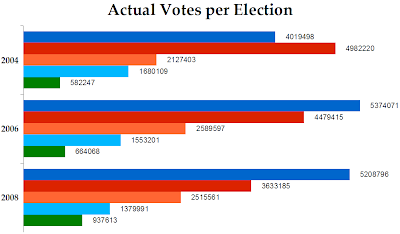 Those who gained also brought new voters to the fold, as the number of voters grew by 1.2 million between 2004 and 2006. Perhaps the thought of replacing the Liberal government brought people out of their homes on voting day.

The following chart shows how the growth or decline in support of each party compares to how their support should have changed due to the growth of the electorate. 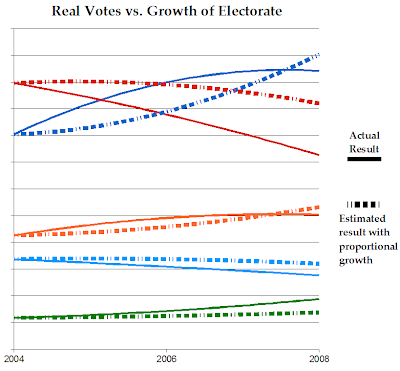 For the Liberals, it is easy to see that their drop in support has been far greater than what we could expect. They dropped from 2004 and 2006, and instead of keeping support and going from 4.5 million votes in 2006 to 4.6 million in 2008, they fell to only 3.6 million.

The NDP has been generally stable, growing more or less at the same rate as the population. However, in 2008 they had 144,000 fewer votes than their 2006 result would have predicted.