On Saturday, Ipsos-Reid released a new Ontario provincial poll, and it doesn't show major movement. However, the Liberals under Dalton McGuinty still lead. 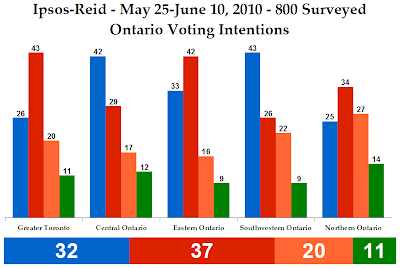 Compared to Ipsos-Reid's last Ontario poll in October 2009, the Liberals have dropped two points to 37%. However, the Progressive Conservatives are down four points to 32%, widening a still narrow gap between the two parties.

The New Democrats are up four points to 20%, while the Greens are up two to 11%.

The major source of Liberal strength comes in the Greater Toronto Area, where they lead with 43% (up one). The PCs trail with 26%, down a staggering 10 points since October. The NDP is up seven here to 20%.

The Progressive Conservative areas of strength are in Central Ontario and Southwestern Ontario. In Central Ontario, they lead with 42%, up five points. The Liberals and NDP have dropped one each to 29% and 17%, respectively. In Southwestern Ontario, they PCs lead with 43% (up 15), while the Liberals follow with 26% (down 15) and the NDP with 22% (down four).

The area of greatest Green strength comes in Northern Ontario, where they have 14% support.

Considering the discontent with the HST and the generally lukewarm attitude Ontarians have towards Dalton McGuinty, who has been in power since 2003 and leader of the Ontario Liberals since 1996, the Progressive Conservatives under their new leader Tim Hudak are really struggling. There is some parallel with the federal situation: a weakly supported government faced with an even weaker opposition.
Posted by Éric at 9:12:00 AM