On June 11, Léger Marketing released its poll looking into the provincial voting intentions of Quebecers. While there hasn't been much change since their last poll at the beginning of May, the Parti Québécois has widened its lead to 11 points. 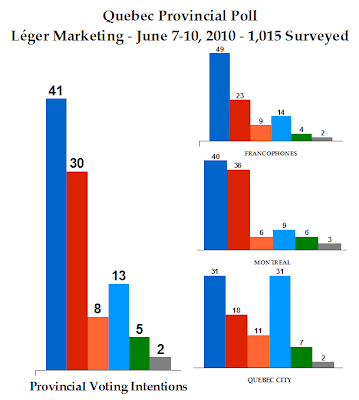 The PQ has gained one point and is now at 41%. The Parti libéral du Québec, on the other hand, has dropped one point to 30%.

The Action démocratique du Québec seems to be finally recovering from the fallout after Mario Dumont's resignation. They've gained one point and now have 13% support, generally what Dumont used to have.

Québec solidaire is steady at 8% and the Parti vert is down two to 5%.

The PQ gain comes primarily in Montreal, where the party is up six points to 40%. They lead there. They've also gained one point among francophones (49%) and lead in the "rest of Quebec" with 44%. Those are strong numbers. The only bad point for them in this poll is that they are down eight points to 31% in the Quebec region. They also have only 9% support among non-francophones.

The PLQ is down four points in and around Montreal to 36%, and down one point in the Quebec region to 18%. However, they are up one to 23% among francophones, and have 26% in the "rest of Quebec". They dominant among non-francophones with 64%.

The ADQ is up four points in the Quebec region and are now tied with 31%. It seems they have a very good chance of keeping what they currently have around the capital. At 14% in the RoQ, however, it is unlikely they have a chance outside of their 'fortress'.

Only 20% of Quebecers are satisfied with Jean Charest's government. A staggering 76% are dissatisfied.

Pauline Marois, at 25%, is still the favourite person to be Premier, but that is down one point. Charest is steady at a woeful 18%. Amir Khadir, of QS, is the only leader to out-perform his party with 10%. Gérard Deltell of the ADQ is up two points to 8%.

This poll also looked into whether Quebecers had a good or bad opinion of certain political leaders.

The man who came on top was Pierre Curzi, a PQ MNA who used to be an actor. Fifty-two percent of Quebecers have a good opinion of him, up five points from December 2009. Next was Khadir, who had 50% (up eight). Those were the only ones with 50% or more.

Rounding out the top five are Claude Béchard (PLQ minister who recently returned from cancer treatments) at 42%, Marois at 42%, and Marguerite Blais, a PLQ MNA who used to be a radio host, at 41%.

Interestingly, only one of PLQ voters' top 10 people has over 50%. For the PQ, there are eight figures with over 50%.

This seems to indicate that a lot of PLQ voters aren't enamoured with their party, but feel they have no other options, while PQ voters seem to like their leading lights very much.

While the Liberals should be in government until 2013, it looks like it will be a grim few years for them. But their majority is relatively slim - they need to hope they aren't out-voted by mistake or that a number of MNAs resign.
Posted by Éric at 9:04:00 AM