Léger Marketing released a new poll earlier this week, on the voting intentions of Quebecers. The result is no surprise, but further confirms that the Bloc Québécois is on the up-swing. 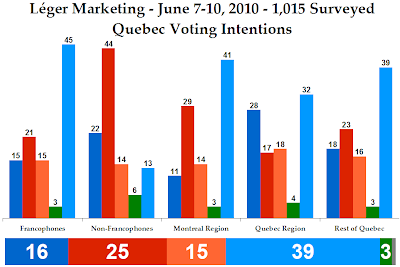 The Conservatives are sinking, down one to 16%. The New Democrats are also pulling back from Léger's high 18% in May, and now stand at 15%. The Greens are down one to 3%.

The major sources of this Bloc gain are among non-francophones, where the Bloc is up nine points to 13%, and more importantly in the Montreal region. There, the Bloc is also up nine to 41%. They lead the Liberals by 12 points there, as they are at 29% (down two).

The Bloc is also up to 45% (two points) among francophones, and holding steady at 39% in the 'rest of Quebec'. They dropped one point in the Quebec region to 32%, but they still lead.

The Liberals did see some gains in the 'rest of Quebec', up five points to 23%. They gained three points among francophones (21%), but lost four among non-francophones (44%).

The source of the NDP drop seems to be in Montreal, where the party is down four points to 14%. That certainly isn't news that will make Thomas Mulcair smile. The NDP didn't gain among any demographic or region, and even dropped five points to 14% among non-francophones. They are surprisingly competitive in the Quebec region, however, at 18%.

The Bloc would win 51 seats with this poll, a gain of three on their current crop of 48 MPs. The Liberals would win 16 and the Conservatives would be reduced to six seats. They currently have 11. The NDP would win two.

The moral of the story: the Bloc is doing well. The Liberals are stuck in the low-to-mid-20s, the Conservatives are under-performing, and the NDP look to be competitive in a handful of ridings.
Posted by Éric at 11:19:00 AM