Like the cleaning of a house, it never ends: EKOS has its new poll out for this week. The biggest change is a drop for the Conservatives. 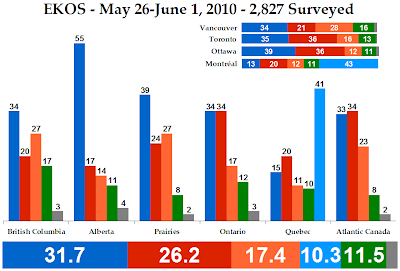 Compared to last week, the Conservatives are down 2.2 points to 31.7%. The Liberals were not the biggest beneficiary, though they did gain 0.5 points to 26.2%. It was the New Democrats who saw the biggest gain, 0.9 points to 17.4% - a high result for them with EKOS. 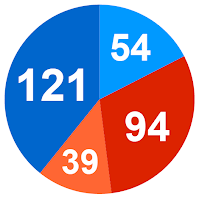 The Conservatives win 62 seats in the West, 44 in Ontario, 5 in Quebec, and 10 in Atlantic Canada for a total of 121 - a big drop from the 137 seats the Tories were projected to win in EKOS's poll last week.

The Liberals win 16 seats in the West and North, 46 in Ontario, 14 in Quebec, and 18 in Atlantic Canada for a total of 94, a gain of seven seats from last week.

The Bloc wins 54 seats in Quebec, thanks to the very low support for the Liberals and Conservatives in the province.

With a combined 133 seats, it is possible the Liberals and NDP would be able to form a government. While some might question the legitimacy of two smaller parties forming government, the legitimacy of a government with only 31.7% support is just as questionable, especially considering this would be a drop of six points from 2008.
Posted by Éric at 9:24:00 AM