On this muggy Friday morning, how about a quick look at the polling results in Ontario and Quebec over the last 12 months?

We'll start with the province where most is at stake in the eventual election: Ontario. 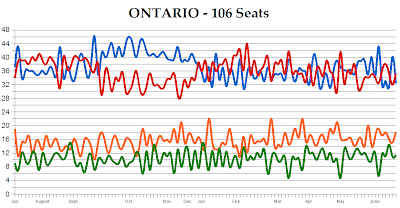 A quick glance at this chart tells you all you need to know. The race is a very close one between the Liberals and the Conservatives, and the NDP is solidly in third.

But a closer look tells us a few interesting things. The race in Ontario has shifted and changed. From July 2009 to early September 2009, the Liberals and Conservatives were neck and neck, but the advantage was with the Liberals, who had an undisputed lead throughout July and August. Then Michael Ignatieff talked about forcing an election, and Liberal fortunes dropped. They dropped so far that the Tories were in front until mid-December and the prorogation.

At that point, the Liberals took a narrow lead and, aside from a few individual polls, held it until April 2010. Since then, the race has been very close, with a slight edge to the Tories.

The NDP looks to have been stable over this period, but a closer inspection shows that they are on a steady, if small, increase. While they were polling between 11% and 18% from July 2009 to December 2009, they've since risen, polling between 14% and 20%. Their gain seems to have come from the Liberals, as every NDP peak corresponds, it seems, with a Liberal valley.

With the up-and-down between the Tories and Liberals, it is impossible to predict exactly where each party would end up on election day. Perhaps that is why they are so close in my projection.

Now, Quebec, where there has been a definite shift of late. 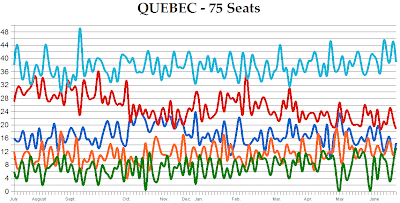 With five parties on the chart, it looks a little more confusing. But the order of the parties is clear: Bloc Québécois, Liberals, Conservatives, NDP, and Greens. But things have been, and are starting to become, much more murky.

The Bloc has held the lead throughout the last year, and have been relatively stable. But they are polling consistently better of late, between 35% and 45% since mid-March 2010. Prior to that date they were polling more around 32% to 42%, and in the summer of 2009 they were polling between 30% and 38%. There has been no definitive break in their numbers like we saw for the Liberals in Ontario, but it is clear that over the last two months things are going well for them.

The Liberals, on the other hand, seem to be on a steady decline. From July 2009 to the end of September 2009, the Liberals were running well, within a few point of the Bloc. But at the beginning of October their numbers tanked, and aside from a brief rebound in January and February 2010, they have stayed there. Their numbers have even gotten worse recently, as from mid-March they've had trouble polling over 24% and have even been below 20% on several occasions.

The Conservatives have been struggling for the entirety of the last year. From July to October they were doing badly, but the Liberal drop in October coincided with a Conservative gain. From October to the prorogation the Tories were running neck and neck with the Liberals for second. Prorogation swatted them back down, and they have been stuck at the under-20% level since then. The NDP is even starting to compete with them for third place.

Like in Ontario, the NDP appears to be a on a slow increase in the province. Whereas they seemed to be averaging 10% until about March of this year, they now seem to be more at the 12% level, with a few polls putting them at 15% or higher. This is good news for the party - slow but solid increase is more sustainable.
Posted by Éric at 10:09:00 AM