Environics Poll: 6-pt CPC Lead - and the Effects of Prompting 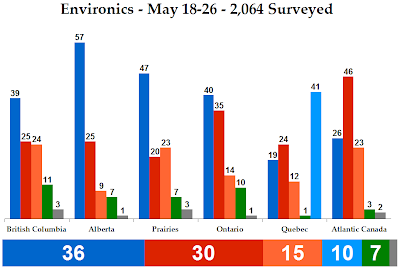 The Conservatives have gained five points and are now at 36%. The Liberals are steady at 30%, while the New Democrats are down one to 15%.

The Bloc Québécois is up one to 10% and the Greens are down six to 7%.

In Ontario, the Tories are up seven points and lead with 40%. The Liberals are up three and follow with 35%. The NDP is down two to 14%. 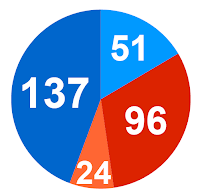 Obviously, bad news for the NDP but a significant gain for the Liberals and a relatively status quo situation for the Conservatives.

Now, about the methodology. When Environics last conducted a national poll in February, they prompted the party names when surveying voting intentions. In other words, they asked the survey-takers "If a federal election were held today, would you vote for the Conservative Party, the Liberal Party, etc." The party names would be listed and rotated each time a new person was asked.

This time, Environics did not prompt. They simply asked respondents for whom they would vote, without listing party names.

The first method gives people their options, and it makes it easier to say for whom they would vote. The second method requires respondents to be more informed and have an actual idea for whom they want to vote. There is an argument for both sides as to which is more accurate, as the voting ballot itself also "prompts".

So, let's compare these two polls. They should give us an indication of how prompting changes a poll, because instead of comparing two different pollsters, we're comparing one pollster who should use the same methods to find their respondents. Thus, the only variable in this comparison is whether respondents were prompted or not.

But what about how it affects each party? Well, we can compare that, too. Obviously, we can't compare the results of that February poll to this May poll without any filter. The change in political climate would have a greater role in any voting intention changes than mere methodology.

So, what I have done is estimate the kind of changes the Environics poll should've shown, assuming they had been consistent with their methodology. This estimate was calculated by taking the EKOS, Angus-Reid, and Harris-Decima polls of late February and comparing them to the EKOS, Angus-Reid, and Harris-Decima polls of late May. We're comparing polls taken at the same time as the two Environics polls, using the change between the average of the three February polls and the three May polls as our guide for estimating how much the Environics poll should have changed.

In other words, if prompting plays no role in polling, then we should see the Conservatives up a little, the Liberals down a little, and the NDP, Bloc, and Greens virtually unchanged. 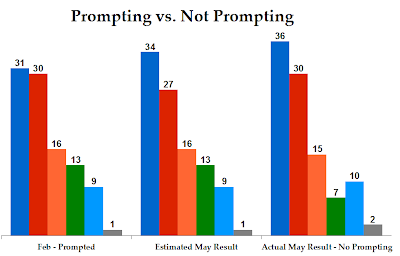 Instead, we see the Conservatives higher than they should be, the Liberals, NDP, and Bloc stable, and the Greens way down.

And, significantly, the Greens should have remained at 13%. Instead, they've dropped to 7% - almost half of their support in February.

What this shows is that prompting gives a boost to the Green Party more than any other, in conjunction with a lower undecided result. The Liberals and Conservatives don't get more support, but they do get a higher proportion of decided support. This indicates that, in a prompted poll, many undecideds choose the Greens as their "parking spot".

The question remains: which is accurate? History argues that Green results in prompted polls are inflated, and inaccurate. On voting day, the Greens have always gotten fewer votes than the pollsters thought they would.

But the Greens have defied history before.

However, until we finally see a Green electoral result matching their polling results, we will have to side with the historical record.
Posted by Éric at 7:54:00 AM