The National Hockey League is a gate-driven sport. That is, most of its revenue comes from ticket sales and whatever they can sell you inside the arena. Other sports, like the National Football League, rely more heavily on broadcasting fees and the like. Though, of course, they still make a good chunk of change on tickets.

Attendance figures are often used to compare how much local support a team has. But is this an accurate assessment? According to this site, the average ticket for a Toronto Maple Leafs game is $117.49, compared to $35.66 for a ticket in Dallas. Toronto sells out the Air Canada Centre, while the Dallas Stars have averaged 17,215 in attendance, according to the Globe & Mail.

So what does all this mean? The Montreal Canadiens have the biggest arena in the NHL, but their ticket prices average $72.18. How does their revenue compare to Toronto? And the poor Phoenix Coyotes averaged 11,989 people per game, at an average price of $37.45 per ticket.

What I've done is, based on these figures, estimated the total gate revenue for each team in the NHL over 41 home games. In other words, the chart below shows how much money each team made from ticket sales alone. It paints a picture that attendance figures cannot. 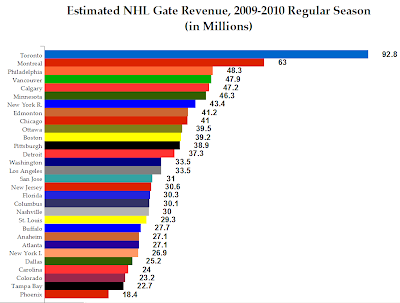 The Toronto Maple Leafs made an estimated $92.8 million in ticket sales over the regular season, almost $30 million more than the second-best Montreal Canadiens. Incredibly, that is more than five times as much revenue as the Phoenix Coyotes earned.

The Montreal Canadiens made $63.0 million, still about $15 million more than the Stanley Cup finalist, Philadelphia Flyers. And all six Canadian franchises find themselves in the top ten, the Ottawa Senators finishing with $39.5 million in ticket sales.

Edmonton and Calgary, both relatively small markets, had $41.2 million and $47.2 million in ticket sales, respectively.

You look at the bottom of the list, and see the usual suspects: Phoenix, Tampa Bay, Carolina, Dallas, the New York Islanders, Atlanta. It's no wonder that these teams are often discussed as potential relocation candidates, and it is a strong condemnation of Gary Bettman's Sun Belt strategy.

It is interesting to note that of all the teams that have been added to the league since 1991, only Ottawa and Minnesota are in the top 15 in ticket sales.

A lot of teams break even by making the playoffs. The amount of money the Montreal Canadians must have made in their three-round run is mind-boggling. Philadelphia and Chicago, too, must have made a lot.

But not every team makes the playoffs. Toronto missed out, but still made $92.8 million in ticket sales - likely more than any other team made in both the regular season and playoffs, with the exception of Montreal.

But Phoenix, with only $18.4 in gate revenue, only played three games in Phoenix. Tampa Bay, Carolina, Dallas, the Islanders, Atlanta, Anaheim, and St. Louis, all teams that made less than $30 million in ticket sales during the regular season, missed out on the playoffs. That means a lot of red ink.

Consider that the salary cap for next season is projected to be about $59 million. That means that every team except Montreal and Toronto needs to earn money through concessions, merchandising, and broadcasting in order to make up the difference.

Now, a lot of money is made inside the arena - as attested by the fact that the $59 million salary cap represents a little more than half of the average team revenue. But we can safely assume that the amount of non-ticket earnings of each team is roughly proportional to ticket sales.

What does this mean for the possible return of hockey to Winnipeg and Quebec? Both of those cities are smaller markets than Edmonton, Calgary, or Ottawa. But let's assume their ticket prices are just a little lower than Ottawa's, the cheapest NHL ticket in Canada.

If Winnipeg manages to sell-out its 15,015-seat MTS Centre, that means $32.0 million in revenue, or 16th in the league. That puts them ahead of franchises like San Jose, New Jersey, St. Louis, and Buffalo.

In Quebec, where the main group pushing for the building of a new arena estimates it will seat 20,014 people, that would equate to gate revenues of $42.7 million, or 8th in the league, putting them ahead of franchises like Edmonton, Chicago, Ottawa, Boston, and Detroit.
Posted by Éric at 10:23:00 AM