With the next provincial election set to take place in September of this year, it was about time I got to designing a projection model for New Brunswick.

While four "major" parties will be vying for the support of New Brunswick supporters, really only two are in the race: the Liberals under Premier Shawn Graham and the Progressive Conservatives under David Alward.

While the New Democrats are also in the race, they have never elected more than one MLA. And we must also beware of their polling results, as they have the tendency to shed much of their support on voting day.

Then, of course, there are the Greens, who will be participating in their first election in New Brunswick. It is unlikely they will play a big role in the coming election, but will undoubtedly benefit from their federal counterpart's renown.

The model is based on the same system used as in my federal model, using historical results to predict future results. However, I am also using a voting day modifier, which ups the Liberal and PC support slightly while reducing the NDP's polling support by about 20%.

I have not set-up a popular vote projector yet, but will once we get closer to the start of the election.

To show-off the model, let's use Corporate Research Associates' last New Brunswick poll, conducted in May. 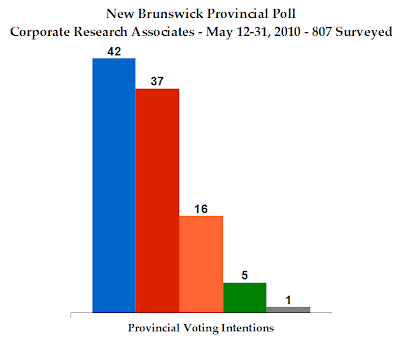 This poll had a five-point gap between the Liberals and Progressive Conservatives, while putting the NDP at 16%. That would be a historic result for the New Democrats in New Brunswick, as they haven't cracked double-digits in an election since 1991 and have never done better than 12%. 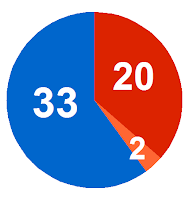 Dialing down NDP support, we get a projection of 33 Progressive Conservatives, 20 Liberals, and two New Democrats. Alward becomes the next Premier of New Brunswick.

At the beginning of August, when the election campaign should begin, I will change the site a little to give more space to the New Brunswick election. I will, of course, still cover federal politics while the provincial election is going on.
Posted by Éric at 9:50:00 AM