Two more polls were released today for the Alberta election campaign, and both indicate that the race between the Progressive Conservatives and Wildrose is on.

The margin between the Tories and Wildrose has now shrunk to only 1.4 points, according to ThreeHundredEight.com's projection. The PCs still lead with 36.6%, but are trailed very closely by Wildrose, who now stand at 35.2%. That is a slip of 2.2 points for the Tories and a gain of three points for Wildrose.

But with these new surveys the polling volatility has increased, as they are starting to tell different stories. Léger's poll puts the margin at almost four points with the PCs ahead, while Forum puts Wildrose 10 points up on the Tories. Forum's poll is the only poll so far conducted after the election call, but it was also in the field on only one day, which can disproportionately swing the mood of the electorate depending on what was in the news.

Because of this degree of uncertainty, the ranges have widened to between 33% and 40% for the Tories and between 31% and 39% for Wildrose. In other words, it is possible that Danielle Smith's party is indeed ahead.

The Progressive Conservatives are still projected to win a majority with 47 seats, but that is down eight from only yesterday and three seats more than the bare minimum for a majority government. Wildrose is projected to win 35, but due to polling volatility it is possible that Wildrose could win a majority if an election were held today. Their ranges run the full gamut of between 16 and 62 seats. Hopefully the polls will tighten up a little before election day.

The Liberals dropped 1.4 points in Edmonton and now sit in third with 16.9%, while the New Democrats were down 1.6 points in the provincial capital to 15.3%. 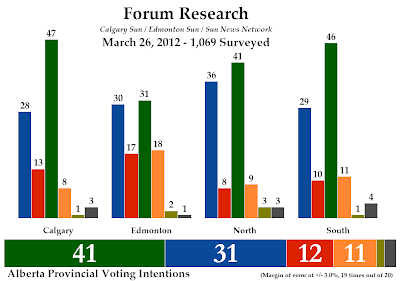 Forum's poll, however, puts Wildrose ahead in every party of the province - including Edmonton. Forum was last in the field on 13 February, and since then Wildrose has gained 11 points and is leading in this survey with 41%.

Since that mid-February poll, Wildrose has made double-digit gains almost everywhere: 11 points in Calgary, Edmonton, and southern Alberta, and nine points in northern Alberta. There is hardly a race whatsoever in Calgary, while the party is doing very well outside the two main centres. The Tories are still competitive in this poll in Edmonton, but to be down in the one part of the province that gives them an inherent advantage over Wildrose is absolutely disastrous for Alison Redford.

We'll need to see if other post-writ polls confirm this state of affairs. If they do, then the Tories are in grave danger of losing this election. 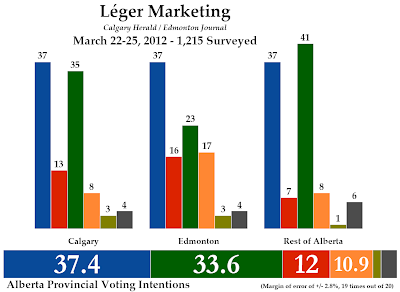 Léger's poll, which was taken before the election was called and at around the same time as yesterday's polls from ThinkHQ and Ipsos-Reid, shows the Progressive Conservatives at 37.4%, almost four points ahead of Wildrose, who sit at 33.6%.

Léger was last in the field 13-18 January, and since then the Tories have lost about 16 points, a huge drop in support. That Léger poll had disagreed with some other surveys showing a closer race, but now Léger is well within what others have recorded.

Wildrose has gained 18 points since mid-January, while the Liberals are up one and the NDP is down two.

Here, we see a close race in Calgary and the rural parts of the province, and the Tories well ahead in Edmonton with Wildrose in second. This is what the other pre-writ surveys indicated.

Have things changed so drastically in the course of only a few days? It is too early to tell. What is certain is that the Progressive Conservatives definitely have a fight on their hands. But Wildrose may have peaked too early - if Albertans see that Danielle Smith might become the next Premier, we could see supporters of the Liberals and NDP flock to the more centrist PCs under Alison Redford. Or, if Albertans decide that 41 years is enough of one-party rule, this may be the first sign that Wildrose is on track for a landslide.
Posted by Éric at 11:49:00 AM