Conservatives and NDP draw even, Tories win on points

A new poll has caused a bit of stir today, as Environics puts the Conservatives and the New Democrats dead even at 30% apiece. But the NDP needs to be ahead of the Conservatives in some key regions in order to win as many seats as the governing party. 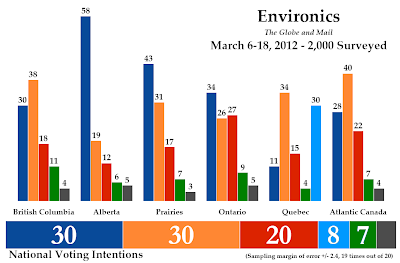 Environics has not been in the field, or at least has not released a poll, since well before the 2 May 2011 vote. Being able to look at the trends would have been helpful in this case.

The Conservatives and NDP are tied with 30% support each, a mark more of Conservative decline than NDP strength. Resilience, however, is another thing entirely as the party has generally held steady since last year's election.

The Liberals are stuck at 20% while the Bloc Québécois stands at 8% nationally, ahead of the Greens who sit at 7% support.

Somewhat problematic is the large result for the Others: 5%. Anything over 1% is unlikely in a general election, putting the remaining 4% in limbo. Adding that 4% to the Conservative result would give us a poll more in line with what other surveys have shown, but it seems like a big stretch to hand one party all of that extra support. If that "Other" result splits 50/25/25 between the Tories and the two main opposition parties, we're still looking at a very close result. Even if it splits 75/25 between the Tories and the NDP, this is still a within-the-margin-of-error gap between the two parties.

The Conservatives are leading in Ontario with 34%, Alberta with 58%, and in the Prairies with 43%. They are trailing in second in British Columbia (30%) and Atlantic Canada (28%).

The New Democrats are ahead in Quebec with 34%, British Columbia with 38%, and Atlantic Canada with 40%, while trailing in second with 19% in Alberta and 31% in the Prairies.

The Liberals are not ahead in any region, but stand in second in Ontario at 27%, one point up on the NDP. The Bloc Québécois trails the NDP with 30% in Quebec.

There is nothing outlandish with these regional results. The NDP has led in several polls on both coasts, and a close race hovering around 30% between the NDP and the BQ seems to be the norm of late. A weaker Conservative result in Ontario has also been a recent feature of polling, while there is nothing unusual in Alberta and the Prairies. In other words, no red flags in this poll.

What might explain this big Conservative decline? It is tempting to point to robo-calls and an impending austerity budget. But this Environics poll needs to be confirmed by some other surveys before we can come to any conclusions, as it stands alone at this point. It is, however, the newest set of data on record (outside of Quebec, at least, see below) so it could be the start of a new trend. The choice of leader at this weekend's NDP convention may or may not clinch this new state of affairs. 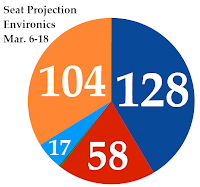 However, the NDP vote is not nearly as efficient as that of the Conservatives, who still take the lion's share of seats in Western Canada and almost half of them in Ontario. With these levels of support, the Conservatives win 128 seats to 104 for the New Democrats, 58 for the Liberals, 17 for the Bloc Québécois, and one for the Greens.

It is noteworthy, however, that despite the Bloc returning to official party status the NDP and Liberals are strong enough to combine for a majority government without needing the support of the Bloc and all the political baggage that brings.

The New Democrats win 16 seats in British Columbia, one in Alberta, six in the Prairies, 24 in Ontario, 45 in Quebec, 11 in Atlantic Canada, and one in the north. That would be upped to 113 seats in the expanded Commons, but their share would decrease from 33.8% to 33.4%.

The Liberals win five seats in British Columbia, three in the Prairies, 30 in Ontario, nine in Quebec, 10 in Atlantic Canada, and one in the north. They would likely win 63 seats on the larger map, their share decreasing from 18.8% to 18.6%. The NDP and Liberals could still combine for a Bloc-less majority, however.

With the convention this weekend, this is certainly a bit of good news for the New Democrats. But they still have a ways to go. They need to be doing much better in Ontario, where they still trail in third, in order to surpass the Conservatives.

Quebec, however, remains key. Though the NDP and Liberals could get away with these 17 Bloc seats, the NDP would do far better to have those 13 BQ gains in their own hands. And, as a more recent CROP poll indicates, things are still very much in the air. 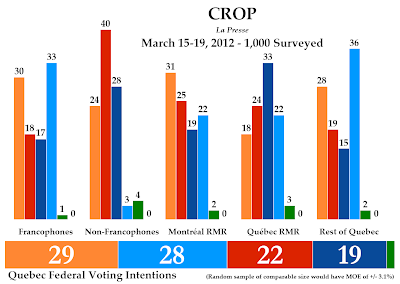 CROP was last in the field 17-21 February 2012, and since then the New Democrats have slipped two points to 29% in Quebec. They still hold a lead over the Bloc Québécois, however, though the party has gained four points to hit 28% support.

The Liberals are also up, gaining two points to reach 22% while the Conservatives are down three points to 19% support.

The New Democrats are ahead in the Montreal region with 31%, but that is still a drop of two points since mid-February. They are trailing in second to the Bloc Québécois among francophones (30%, -1) and in the regions of Quebec (28%, -3).

The Bloc Québécois has 33% support among francophones, up four points since the last poll, and hold a wide lead in the regions with 36%, a gain of nine points.

The Conservatives are ahead in Quebec City with 33% (-4) and place second among non-francophones with 28% (-4).

With these results, the Bloc Québécois would win 27 seats to 22 for the NDP, 15 for the Liberals, and 11 for the Conservatives. This is a very different result from Environics's poll, and would transform the projection for their national numbers to 135 Conservatives, 81 New Democrats, 64 Liberals, and 27 Bloc MPs. This means the NDP and Liberals could combine for only 145 seats, short of a majority and so requiring the support of the Bloc Québécois.

This is why Quebec is so important to the New Democrats. If they are to form a government on their own, they absolutely need Quebec before they can even think of making the gains required in the rest of the country. If they are to form a government in tandem with the Liberals, they still need to hold on to the bulk of their Quebec seats, otherwise the Bloc wins too many for the two parties to govern without the support of the politically toxic BQ.

Poll after poll indicates that Thomas Mulcair is the NDP's best hope for Quebec, but there is nothing that says that a Brian Topp or a Peggy Nash, for instance, would not be able to gain traction in the province over the next three years. But the question with them is whether they can gain the support the party needs in the province, whereas Mulcair merely has to maintain the support that polls indicate he would have. The easier task is obvious.
Posted by Éric at 11:14:00 AM