PQ on cusp of majority

A new poll by Léger Marketing for Le Devoir and the Montreal Gazette was released over the weekend, showing strong gains for the Parti Québécois at the expense of the Coalition Avenir Québec. It puts the PQ in range of a majority government. 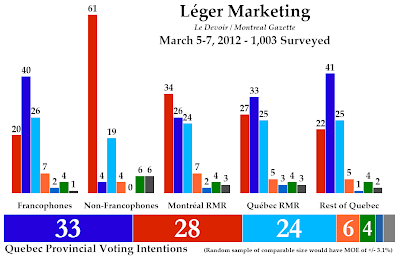 Léger was last in the field February 10-12, and since then the Parti Québécois has vaulted into first with a four point gain. They now lead with 33%.

The Liberals are down one point to 28%, while the CAQ is down four points to 24%.

Québec Solidaire is down two points to 6%, while the Greens hold firm at 4%. Option Nationale scored 2% in their first outing in Léger's polling.

This is a big rebound for the PQ, a party that was written off earlier this year. The CAQ is dropping very quickly, while Québec Solidaire also appears to be taking a step backwards as the PQ's fortunes rise. The multitude of parties on the left and supporting sovereignty does not appear to be hurting the PQ much, as the vote that can be divided has grown: support for the PQ, QS, and ON stands at a combined 41%, while it stood at 37% in early February.

The Parti Québécois leads among francophones with 40%, up five points since Léger's last poll. The CAQ trails with 26%, down six points, while the Liberals are up one to 20%. That is an important lead for the PQ among a key demographic.

The PQ also leads in Quebec City with 33%, up 11 points. That is somewhat unusual for the PQ, which usually trails the Liberals and the CAQ in the capital. The Liberals scored 27% (-5), while the CAQ dropped seven points to only 25% in what is supposed to be their fortress.

For their part, the Liberals lead among non-francophones with 61%, down five points since early February. The CAQ is up six points to 19%, while the Greens are at 6%.

The Liberals also lead in the Montreal region with 34% (-1) to 26% (+3) for the Parti Québécois and 24% (-1) for the CAQ. That narrow gap between the PQ and the CAQ means that François Legault's party should have a competitive edge off the island, as the PQ does better on it. 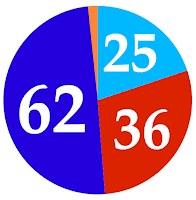 With these levels of support, the Parti Québécois wins 62 seats, one short of a majority. But there are enough close ridings and the party holds enough of an edge in the francophone electorate that a majority is also a very good possibility.

The Liberals win 36 seats and the CAQ wins 25, while two go to Québec Solidaire.

The Parti Québécois wins 13 seats in and around Montreal, six in Quebec City, and 43 in the rest of Quebec.

The Liberals win 31 seats in and around Montreal, one in Quebec City, and four in the rest of Quebec.

The CAQ wins 12 seats around Montreal, four in Quebec City, and nine in the rest of Quebec.

The PQ's dominance outside the two main cities is what hands them their victory. Aside from a few pockets of Liberal resistance in the Outaouais and by the CAQ in the Centre-du-Québec and the Beauce, the PQ sweeps the régions of the province. But the Liberals are very much a force to be reckoned with in Montreal and in a few parts of the outlying suburban areas, while the CAQ is well placed to win seats south and especially north of Montreal. The PQ's massive edge outside of Montreal means that they only have to be somewhat competitive in and around the city in order to win enough seats to put them over the top.

And Pauline Marois is no longer weighing them down. Disgruntled PQ MNAs and members wanted her head, but she is now seen as the best person to be premier by 25%, up 14 points since early February. Jean Charest and François Legault have both slipped to 21%. Even the number of people who say "none of the above" or "I don't know" has fallen from 41% to only 27%.

These are excellent numbers for the Parti Québécois, unthinkable only a few weeks ago. The party is also on the upswing while the Liberals are stagnant and the CAQ is dropping. But Quebec is very volatile at the moment, and things could swing dramatically once again. Charest is still within range of being about to pull victory from the jaws of defeat, but his numbers among francophone voters (i.e., 80% of Quebecers) are just too weak. As I've seen mentioned elsewhere, if they jump a little he may pull the plug on his government.
Posted by Éric at 11:18:00 AM