February was a difficult month for the governing Conservatives. It started with questions on Old Age Security and pensions before moving on to the government's internet surveillance legislation and the unfortunate comments in the House of Commons by Public Safety Minister Vic Toews. It then finished with the robo-call allegations. Though two recent polls indicate little change since January, averaging out the results indicates that the Conservatives are slipping. 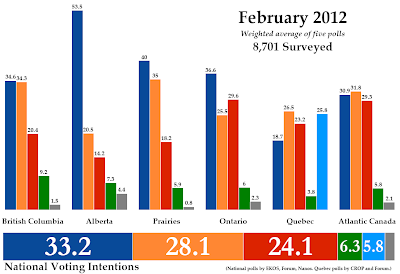 Three national polls and two Quebec polls were conducted in February, surveying a total of 8,701 Canadians.

The Conservatives dropped 1.9 points to 33.2% in February, their lowest result since November 2010. Aside from a small uptick in January, the Tories have been on a steady decline since September. 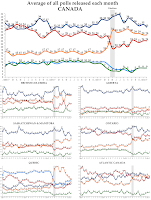 The New Democrats have dropped for the fourth consecutive month in Quebec, slipping 3.5 points to 26.5%, their lowest point since before the May 2011 election. Remarkably, the NDP has lost 20 points in a matter of only four months. Both the Bloc Québécois and Liberals have benefited, the two parties on a steady increase since the NDP began to plummet in the province. The Bloc picked up 2.1 points to reach 25.8%, their highest total since April 2011, while the Liberals were up 2.9 points to 23.2%, their highest total since November 2010. The Conservatives dropped 0.4 points to 18.7%, generally where they have been for the last four months. The Greens also dropped, falling 1.8 points to 3.8%.

The Conservatives led in Ontario with 36.6%, down 2.2 points since January. The Liberals were down 2.1 points to 29.6%, while the New Democrats were up 1.3 points to 25.5%. The Greens gained 0.6 points to hit 6%. Things have been oscillating up and down in Ontario for the last four months, with no clear trend.

The New Democrats maintained a slight edge in Atlantic Canada, where the three-way race has been incredibly close over the last three months. The NDP was down 2.9 points to 31.8%, narrowly edging out the Conservatives, who were up 1.8 points since January to 30.9%. The Liberals were down 1.2 points to 29.3%, while the Greens were up 0.2 points to 5.8%.

Finally, the Conservatives and New Democrats hit their extremes in the Prairies. The Tories were down 7.2 points to 40%, the lowest result I have on record since at least January 2009. The NDP is at their highest on record since that time, gaining 3.6 points to hit 35%. The Liberals were up 2.3 points to 18.2% and the Greens were up 0.6 points to 5.9%. 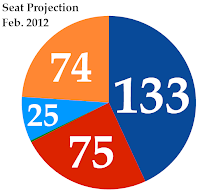 In an election held in February, the Conservatives win 133 seats, down four seats since their projected total in January. The Liberals win 75 (+6), while the NDP wins 74 (-17). The Bloc Québécois wins 25 seats, up 15, while the Greens still win one.

That is quite a change in the landscape, with the Liberals narrowly edging out the NDP for the Official Opposition role. The two parties, along with the Greens, could only combine for 150 seats, five short of a majority.

The Conservatives win 17 seats in British Columbia, 27 in Alberta, 13 in the Prairies, 52 in Ontario, 11 in Quebec, 12 in Atlantic Canada, and one in the north.

The Liberals win five seats in British Columbia, five in the Prairies, 30 in Ontario, 21 in Quebec, 13 in Atlantic Canada, and one in the north.

The New Democrats win 13 seats in British Columbia, one in Alberta, 10 in the Prairies, 24 in Ontario, 18 in Quebec, seven in Atlantic Canada, and one in the north.

In a 338-seat House, the Conservatives would likely win 149 seats (increasing their share from 43.2% to 44.1%). The New Democrats and Liberals would each win 81 seats (a decrease from 24.4% to 24% for the Liberals, unchanged for the NDP at 24%), and the Bloc Québécois 26. Again, a combination of NDP, Liberal, and Green seats would still be short of a majority.

Proponents of NDP expansion in the West should be happy with this result. The party is neck-and-neck with the Conservatives in British Columbia, on the brink of winning an extra seat or two in Alberta, and challenging the Tories for hegemony in Saskatchewan and Manitoba. But victories in the West are worth little if the party loses 40 seats in Quebec and makes no serious gains in Ontario. It will be a difficult balancing act for the NDP if they want to form government - an act the Conservatives do not need to attempt.
Posted by Éric at 10:18:00 AM