With the NDP leadership campaign coming to a close on the weekend, endorsements have been coming fast and furious over the last seven days. While all six major candidates have received at least one endorsement this week, Thomas Mulcair has taken the lion's share and continues to lead the field. 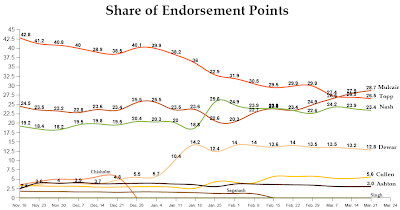 Mulcair also received a good chunk of support from Ontario, with the endorsements of Ontario MPPs France Gélinas, Michael Prue, and Teresa Armstrong. It's worth noting that Prue had run for the Ontario NDP leadership in 2009. Two former MPs from the province, Steven Langdon and John Paul Harney, also endorsed Mulcair for the leadership.

Out west, Buckley Belanger (Saskatchewan MLA) and Piers McDonald, NDP Premier of Yukon from 1996 to 2000, threw their support behind Mulcair.

Nathan Cullen landed the next most important endorsement after Jack Harris, that of Thunder Bay-Superior North MP Bruce Hyer, who is currently in his second term.

Niki Ashton announced her first major endorsement in some time, receiving the support of Ontario MPP Sarah Campbell. She represents the riding of Kenora-Rainy River, which actually borders Ashton's Churchill riding in Manitoba.

It was an interesting week for Brian Topp, as Ed Broadbent came out against Thomas Mulcair's leadership bid. To put a sharper point on it, Topp was able to welcome the support of Sana Hassainia, the MP for Verchères-Les Patriotes. She had originally endorsed Mulcair, and from what I can tell is the first and only endorsement-switcher of the campaign.


Topp also received the endorsement of Maureen MacDonald, MLA in Nova Scotia and Health Minister in Darrell Dexter's NDP government. She had originally endorsed Robert Chisholm, who has since endorsed Mulcair. As half of Chisholm's endorsers who have not endorsed another candidate are given to Mulcair, the support of Hassainia and MacDonald actually results in Topp stealing endorsement points away from his chief rival.

Peggy Nash had two provincial endorsements to announce this past week, that of Cindy Forster (Ontario) and Leonard Preyra (Nova Scotia).

(Click here to learn more about the endorsement system and here for how the points are awarded. And, as always, you can right-click the lists of endorsers and open in a new tab or window to magnify them.) 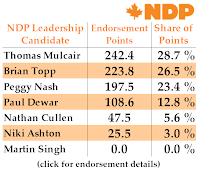 Brian Topp has gained three points but has dropped 0.4 percentage points to 26.5%.

Paul Dewar put up 0.5 new endorsement points but dropped 0.4 percentage points to only 12.8%, his lowest since January 25.

Nathan Cullen was the week's biggest gainer after Mulcair, thanks to Hyer's five points. It means he gained 0.4 percentage points, and now sits at 5.6% of the total.

I may be starting to sound like a broken record, but I think Nathan Cullen is likely to get much more than 5.6% of votes on the first ballot. He appears to be a candidate in the style of a Christy Clark or Alison Redford, that is to say one that has wide support among the membership but very little support among the establishment. A poll released by Forum at the end of February appears to back this up, as it indicated that 28% of NDP supporters in British Columbia favoured Cullen for the leadership of the party. Of course, NDP supporters are not the same as NDP members, but Cullen does have more financial support in British Columbia than all other candidates combined. That Cullen is probably the first (or at least second) choice of B.C. NDP members is important considering that British Columbia has the largest share of the NDP members in the country.

In that poll, Thomas Mulcair finished second among NDP supporters in British Columbia with 21%, while Brian Topp was not far behind at 19%. Peggy Nash and Paul Dewar were well behind with 13% and 11% support, respectively, while Niki Ashton stood at 7% and Martin Singh at only 2% of decided NDP supporters.

This is just one indication of how scattered NDP support will likely be on the first ballot. Let's assume every member in B.C. votes (they won't, but let's go with it anyway) and that Cullen gets 28% of those ballots. That is 11,200 votes out of the 131,000 ballots that could be cast by the weekend, enough alone to give Cullen 8.5% support within the party nationwide. A good score, but if Mulcair receives 21% of the votes from B.C., or 8,400, he can add that to the 11,480 votes he might get in Quebec (using Forum's latest poll where Mulcair had 82% support among NDP voters, and again assuming 100% turnout) and walk away with 15.2% of the party's votes, based on these two provinces alone.

With the exception of Quebec, we're likely to see this pattern repeated throughout the country. Brian Topp will probably get the most votes from Saskatchewan, but the other candidates will take a good share as well. Niki Ashton and Paul Dewar are likely the favourites in Manitoba, but that doesn't mean the other five candidates won't take, perhaps, the combined majority of the votes in that province.

This is why Thomas Mulcair is probably the best placed candidate. He is the consensus choice in Quebec, but appears to have moderate or strong support in every other province. If he can take 90% of the vote in Quebec by the final ballot, which does not seem unlikely, he would need roughly 45% support from the rest of the country. In other words, whoever is on the last ballot with Mulcair could take a majority of the vote in English Canada and still lose because of the advantage Mulcair already holds in Quebec. Add to this the likelihood that Quebec, whose membership is almost entirely new, will probably have the highest or one of the highest turnout rates in the country and Mulcair's advantage is increased.

Does it mean he is a shoo-in? Not exactly, as it is not difficult to imagine Mulcair taking less of the Quebec vote on the final ballot and his opponent taking more than 55% of the vote in English Canada. But there is nothing that indicates that any of the other major contenders can definitely be the choice of a large majority of NDP members outside of Quebec.

This is the last Wednesday update, but I will do a final update on Friday when the convention kicks off. I'm still making plans for the day of the convention, but I hope to run a live-blog with updated endorsement rankings throughout the day and some other neat stuff. I hope you'll stop by.