The Corporate Research Associates released their quarterly poll for Nova Scotia yesterday, indicating that support for the provincial Liberals has grown on the backs of the Progressive Conservatives. But this is a fight for second, as Darrell Dexter's NDP still holds a 17-point lead over their nearest opposition rival. 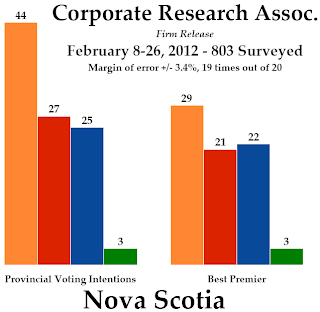 CRA was last in the field in November 2011, and since then the New Democrats have slipped only one point, maintaining their lead with 44%. The Liberals are up five points to 27% while the PCs are down four points to 25%. The Greens are down one to 3%.

Nova Scotia is set to vote in 2013, but these poll results are virtually identical to the electoral results of the 2009 election. It would appear that Nova Scotians have remained unmoved over the last three years.

But there has been some variation since the last vote. At 27%, the Liberals are at their highest point since February 2011, while at 25% the Tories are at their lowest since August 2010.

Things are generally solid for Dexter, whose government has a 48% satisfaction score, compared to 42% who are dissatisfied. He is seen as the best person to be premier by 29%, though that is down seven points since November and his lowest score since May 2011.

Stephen McNeil is the choice of 21%, down one point since November but pretty steady over the last year. Jamie Baillie, leader of the Progressive Conservatives, has moved ahead of McNeil and now registers 22% support, up four points. He has been on a relatively steady increase since becoming leader at the end of 2010. 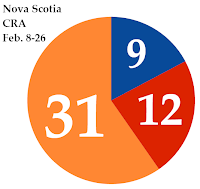 With these levels of support, the NDP wins 31 seats, the Liberals 12, and the Progressive Conservatives nine.

The New Democrats win 14 seats in and around Halifax, with the Liberals taking four.

The Tories win four seats in Cape Breton while the Liberals win three and the NDP two.

In the Valley and the South Shore, the New Democrats win seven seats to five for the Liberals and two for the Tories.

And in Fundy and the central part of the province, the NDP takes eight seats with the Tories winning three.

Status quo for Nova Scotia, with the New Democrats winning a second term and the Liberals forming the Official Opposition. Dexter's support has been pretty solid for some time, though for a brief period in his government the provincial landscape was split three-ways, as it has been before. But with the next election likely to come on the heels of the May 2013 election in British Columbia, where the BC NDP is favoured, the trends look favourable for the New Democrats in Nova Scotia as well.
Posted by Éric at 11:34:00 AM