New surveys by ThinkHQ and Ipsos-Reid, taken shortly before the Alberta election was officially called yesterday, indicate that the Wildrose Party has significantly closed the gap over the past weeks.

The margin between the Progressive Conservatives and Wildrose is now projected to be only 6.6 points, with the Tories sitting at 38.8% and Wildrose at 32.2%. Since 13 March, the Tories have remained stable but Wildrose has picked up 4.6 points. The two parties' ranges almost overlap, with polling volatility indicating that Wildrose could get as much as 36.7% of the vote, compared to a low of 36.8% for the Tories.

The result is that the Progressive Conservatives are now projected to win 55 seats, down from 65 in mid-March. That still puts them well over the bar for a majority government, but their low range reaches down to 42 seats, just short of a majority. The good news for Alison Redford, however, is that Wildrose is now projected to win no more than 36 seats, suggesting that the Tories will be able to hold on to power with these levels of support.

Wildrose has picked up an extra ten seats since the last projection, and are now projected to win 27. They are no longer in danger of placing behind the Liberals, who are projected to win one seat. They could win as many as six, however, tying them with the high range of the New Democrats. But the NDP is projected to win four seats, putting them in third place in the legislature.

Calgary is where Wildrose's gains have been concentrated, as they have picked up 5.4 points and now lead in the city with a projected 37.8% support. That's enough to give them 16 seats in the city, pushing the Tories down to 11 seats with 36.6% of the vote. The PCs have dropped two points in Calgary while the Liberals are down almost three to only 13.1% support. 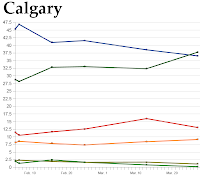 Calgary does appear to be the major battlefield as this race begins. Though a few seats are at play in Edmonton, the stakes there have more to do with the performances of the Liberals and the NDP. But if Wildrose is going to have any hope of winning this election, they need to make major gains in Calgary, in addition to the rural parts of the province where they might be expected to have an easier time of it.

As the chart shows, Wildrose has slowly progressed upwards in Calgary since the beginning of February, their recent bump coming primarily at the expense of the Liberals, but also of the Tories. Whether or not Danielle Smith is actually stealing votes directly away from the Liberals is impossible to know, but it could be that some Liberal voters are moving to the Tories to stop Wildrose, while some right-wing Tory voters are moving to Wildrose to defeat the government.

The biggest drop in PC support, however, has come in Edmonton. The party is down 3.6 points there to 38.3%, though that still puts them well ahead of Wildrose, who have moved into second place with a 2.6 gain to hit 21.8%. They are now projected to win two seats in the Edmonton CMA, a breakthrough in and of itself. The New Democrats have also taken a step forward in the provincial capital, gaining 2.1 points to reach 16.9%. The NDP's high range is 20.4%, giving them the potential to finish second in Edmonton.

In the rest of the province, the two parties on the left of the Alberta spectrum have taken a big hit, with a drop of 2.6 points for the NDP and 2.9 points for the Liberals, who are now projected to finish fourth in the region. Both the Tories (+4.5) and Wildrose (+3.1) have made gains in this part of the province. 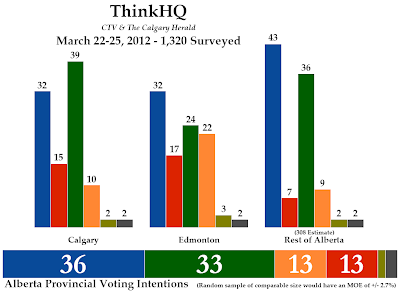 The poll from ThinkHQ is the newest and largest to be added to the projection, and since the firm was last in the field between 16-20 February, the Progressive Conservatives have dropped six points to 36%. Wildrose is up four to 33%, while the NDP and Liberals are tied at 13% (unchanged for the NDP, up one for the Liberals).

The Tories have lost support since mid-February in both Calgary and Edmonton, primarily to the benefit of Wildrose and the NDP. The PCs placed second in Calgary in this poll, while only holding an eight-point lead in Edmonton.

The results for the rest of Alberta were not released, but my estimate puts the Tories slightly ahead of Wildrose for this poll, with the Liberals and NDP well behind.

The negative personal numbers for Alison Redford in this survey give us an indication of why the PCs have taken a hit on the eve of the campaign. 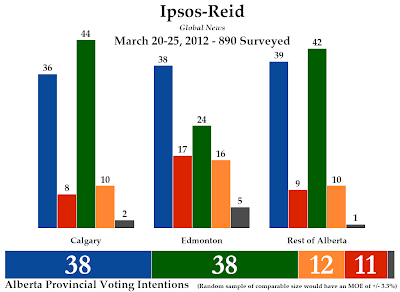 Ipsos-Reid's survey ended on the same day as ThinkHQ's, but stretched back a little further. Ipsos-Reid hasn't been in the field for some time, and in its first poll of the year puts the Progressive Conservatives and Wildrose tied at 38% apiece. The NDP trails in third with 12% while the Liberals are at 11%.

Here again, we see that Wildrose has moved ahead in Calgary and is running in second in Edmonton. Ipsos-Reid puts Wildrose also in the lead in the rural parts of the province, but narrowly.

These two polls suggest that Wildrose is making important gains, particularly in Calgary, just as the campaign gets underway. Danielle Smith has the momentum, but is still a long way from over-taking the Tories in a definitive fashion. The party needs to win a lot more seats in Calgary and outside the two main cities to have any hope of winning the election, a prospect that will remain dim unless they can make some inroads in the provincial capital.

But the campaign is just beginning, and these surveys are showing that it will be an interesting race. The Progressive Conservatives hold the inside track thanks to their lead in Edmonton and their inherent advantage in organization, fundraising, and incumbency, but that advantage is far from decisive.
Posted by Éric at 10:19:00 AM