Both Thomas Mulcair and Peggy Nash secured some major endorsements this past week, but a new poll suggests that only Mulcair can save the New Democrats in Quebec. While that may not come as a surprise, the extent of the cull of NDP MPs in the province under a Brian Topp or Peggy Nash-led party is remarkable. 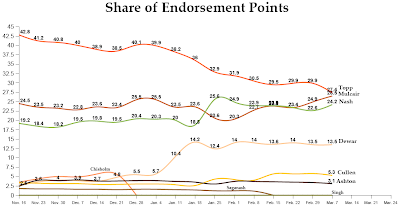 But first, let's get to the endorsement rankings. Thomas Mulcair made the biggest gains this past week.

His most valuable endorsement comes from Robert Chisholm, a Nova Scotia MP and former leader of the party there. But most importantly, he was a former candidate for the leadership and I assigned Mulcair half of the points Chisholm had earned from endorsements that have not been given to another candidate.

Mulcair also received the endorsement of David Christopherson, a four-term MP for Hamilton Centre who used to sit in Bob Rae's Ontario government.

Three BC MLAs, Mike Farnworth, Jenny Kwan, and Rob Fleming, also gave Mulcair their endorsements. Farnworth was a former candidate for the BC NDP leadership, but though he was a frontrunner going into the convention he ended up being defeated by Adrian Dix. A bad omen for Mulcair?

Finally, Brian Topp received a spate of endorsements from NDP luminaries in Saskatchewan. The only one recorded in my system, however, is former Saskatchewan MP John Solomon. 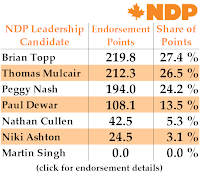 Brian Topp remains at the top of the table with 219.8 endorsements points, gaining two this week. But he lost 2.5 percentage points, slipping to 27.4%.

He is only narrowly ahead of Thomas Mulcair, who gained 31.1 points and 1.6 percentage points. He now has 26.5% of all available points.

Paul Dewar is unchanged at 13.5% of endorsement points, though he gained 10 points for his two caucus endorsements.

Now to the Forum poll on how Canadians would vote with different leaders of the NDP. Forum limited the questions to Thomas Mulcair, Brian Topp, and Peggy Nash. It would have been interesting to have Paul Dewar and Nathan Cullen included, but it seems unlikely that Cullen or Dewar would have radically different results. 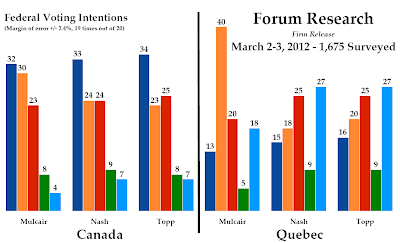 As this chart shows, Thomas Mulcair performs much better than either Peggy Nash or Brian Topp among the electorate.

A Mulcair-led NDP would have the support of 30% of Canadians and stand only two points behind the Conservatives.

But what is most remarkable is what difference the identity of the leader makes in Quebec. Under Thomas Mulcair, the New Democrats would return to 40% support. Though the Liberals would pick up some support compared to May 2011, Mulcair manages to reduce Bloc support below 20%.

Under Brian Topp, the NDP would have only 20% support and rank behind the Bloc (27%) and the Liberals (25%). It could get even worse under Peggy Nash, as the party would sink to 18% support. Considering Paul Dewar's difficulties in French and his lack of recognition in the province, we can safely assume his numbers would be similar to Nash's. 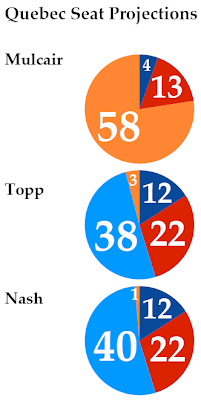 With Thomas Mulcair, the New Democrats hold on to their 58 seats in Quebec. Under Mulcair, the NDP even squashes the Bloc Québécois to non-existence. The Liberals would win 13 seats and the Conservatives only four, one fewer than they currently have in the province.

But under Brian Topp, who was born and raised in Quebec, the New Democrats are decimated and reduced to only three seats. The Bloc returns with a vengeance and wins 38 seats, while the Liberals take 22 and the Conservatives 12.

Under Peggy Nash, the NDP is returned to the pre-2011 days in the province with only one seat. The Liberals and Conservatives still win 22 and 12 seats, respectively, while the Bloc makes the gains to hit 40 seats.

New Democrats might ask themselves if it is worth keeping Quebec if they lose the rest of the country or are unable to make gains. That might seem to be the case with Thomas Mulcair, but this poll does not bear that out.

There really isn't much difference in the rest of Canada between a Mulcair-led NDP and an NDP led by either Topp or Nash.

So while Mulcair may have enemies within the party, he is much more appreciated among the electorate. Cullen, too, has fierce opponents within the NDP but Canadians seem to like his main proposal. The country is split at 43% for and 43% against his idea of joint nominations. Fully 58% of Quebecers like the idea and 60% of New Democratic voters. Even 59% of Liberal voters think it is a good idea.

There is a chance that members of the NDP are diverging from the opinions of its supporters. Some New Democrats might cringe at the thought of moving closer to the centre, as they may do under Mulcair or Cullen, but that is what Canadians seem to want. It is certainly possible that Canadians would warm up to Topp, Nash, or Dewar by the time 2015 rolls around, or that Mulcair would repel them by then, but at this stage it would appear the Canadians are looking for the kind of NDP that Mulcair would lead.
Posted by Éric at 10:22:00 AM