NDP back in first in Quebec

A new poll by Forum Research shows that, despite the robocall allegations and indications that more Canadians blame the Conservatives for the alleged calls than any other party, support remains unchanged at the national level. But in Quebec, the New Democrats have moved back into first place after languishing in second or even third in Forum's polling.

You can read my article about what this new Forum poll says about the robocall allegations at The Huffington Post Canada here. 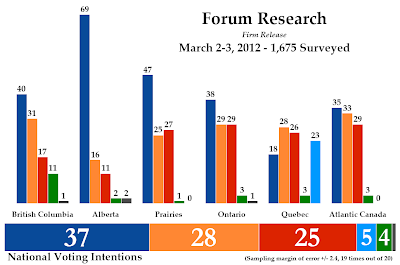 Forum Research was last in the field on February 6, and since then the Conservatives have gained one point. They now lead with 37% support.

The New Democrats are unchanged at 28% while the Liberals have slipped one point to 25%.

The Bloc Québécois is down one to 5% and the Greens are up one to 4%.

Forum made two very welcome improvements to their polling, at least in this report. Alberta has split off from the Prairies and the poll was taken over two days instead of over one. Hopefully, Forum will continue to conduct and report its findings in this manner.

The most noteworthy regional shift in this poll is in Quebec, where the NDP has picked up six points (since Forum's Quebec-only February 23 poll) and leads once again with 28%. They are trailed by the Liberals, unchanged at 26%, and the Bloc Québécois, down six points to 23%. The Conservatives, meanwhile, are up one point to 18%.

The Conservatives lead in every other region of the country. In Ontario, they are down four points to 38% while the NDP is up five points to 29% to tie the Liberals, who are unchanged from last month.

In British Columbia, the Conservative have picked up eight points and now lead with 40%. The New Democrats stand at 31% (-8) and the Liberals at 17% (-7). The Greens get their best result here with 11% support, up six points.

And in the Prairies, the Conservatives have 47% support to 27% for the Liberals and 25% for the NDP. That is a bit of an odd result, as in most polls the Liberals have been languishing in third in Saskatchewan and Manitoba. 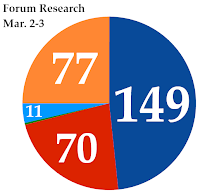 With these levels of support, the Conservatives win 149 seats, six short of a majority. The New Democrats win 77 seats and the Liberals win 70, giving them a combined 147 seats, two short of the Tories. The Bloc Québécois wins 11 seats while the Greens win one.

The Conservatives win 20 seats in British Columbia, 27 in Alberta, 21 in the Prairies, 56 in Ontario, 10 in Quebec, 14 in Atlantic Canada, and one in the north.

The New Democrats win 11 seats in British Columbia, one in Alberta, two in the Prairies, 24 in Ontario, 32 in Quebec, six in Atlantic Canada, and one in the north.

The Liberals win four seats in British Columbia, five in the Prairies, 26 in Ontario, 22 in Quebec, 12 in Atlantic Canada, and one in the north.

This is the first poll in a little while to show the Conservatives so close to a majority. Another feature of recent polling is that the New Democrats and Liberals are no longer in a position to outnumber the Conservatives, and especially to form a majority on their own. This is partly the fault of the Bloc Québécois. Though their support is still stuck at around where it was in May 2011, they are doing much better relative to the New Democrats. The seven extra seats they win in this poll make a big difference - hand them to the NDP and a combination of Liberal, Green, and NDP seats would total 154, or half of the House.

What is perhaps most surprising is that support for the Conservatives is rock solid, despite the allegations flying about. Can the Tories sail through another bit of bad news unscathed, or is this the calm before the storm?
Posted by Éric at 9:23:00 AM