After the headline-grabbing poll from Environics yesterday, Angus-Reid and Harris-Decima submitted their entries in order to further muddy the waters. Both show a Conservative lead, but the size of it varies considerably. They both show the New Democrats at just under 30% support, which seems to be the consensus across every poll, but their position in Quebec remains uncertain. 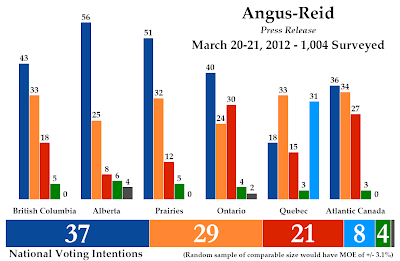 Let's start with the poll from Angus-Reid, which is the most recent. The firm was last in the field 20-21 January and since then the Conservatives have slipped two points to 37% support.

The New Democrats trail eight points behind with 29%, up one point since the January survey.

The Liberals are down one to 21% while the Bloc Québécois is up three points to 8%. The Greens have dropped one point to 4%.

The Liberals placed second in Ontario with 30%, an increase of one point, while the Bloc Québécois is second in Quebec with 31%, a gain of eight points.

It is interesting to note that, despite the Conservatives leading and only slipping slightly, Stephen Harper's personal numbers have taken a tumble: 37% of respondents said their opinion of him has worsened. That is more than double the 18% who said the same of Bob Rae.

The Angus-Reid survey also included some NDP leadership numbers, in terms of which candidate would make Canadians more likely to vote for the NDP. No surprises in the results: Thomas Mulcair got 12% while Brian Topp and Peggy Nash placed second with 4%. The rest of the candidates were slightly behind, but we're talking margin of error differences. 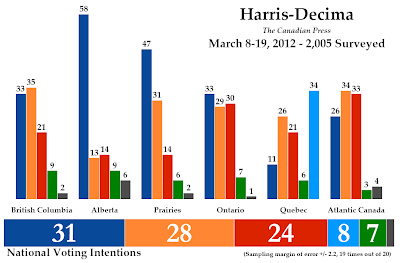 The field days are quite different, in addition to the methodologies employed. Both show general stability and the truth likely lies somewhere in between their results, but at this stage opinion seems to be still somewhat foggy with the next election so far away and the NDP leadership campaign waiting to come to a close. It seems safe to conclude, however, that the NDP and Conservatives are probably not tied after all.

The differences make us search for consistencies. Both Angus-Reid and Harris-Decima were in the field around the same time in their last two surveys, giving us the ability to look at some trends. Are there any?

Both polls show the Conservatives losing ground in Ontario and Alberta, while gaining in British Columbia. The New Democrats have lost since January in both polls in British Columbia, but have gained in Alberta. The Liberals are down in both polls in Alberta and Atlantic Canada, while the Bloc Québécois is up significantly in Quebec. That seems to be the main point of agreement across every poll.

More generally, they both show relatively close races in British Columbia (between the Tories and the NDP) and Atlantic Canada (between all three parties). They both show the NDP competitive, but still well behind, the Tories in the Prairies. And they all show the NDP running third in Ontario, and in a neck-and-neck race with the Bloc in Quebec. That last bit of agreement has the most important implications. 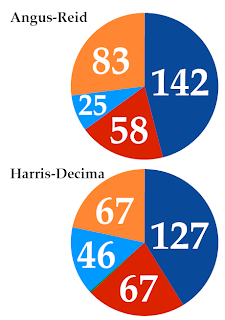 The seat projection for these two polls shows why. One would expect the Harris-Decima poll, with the narrow margin between the NDP and the Tories, to have the best result for the Official Opposition. But no - trailing the Bloc by eight points in Quebec means the NDP's ranks in the province are decimated. Holding steady at the national level is all well and good, but if it is the result of small gains in the rest of the country making up for losses in Quebec, the NDP just doesn't win the seats required to make good the drop in the province.

Angus-Reid's results would give the Conservatives 142 seats, the New Democrats 83, the Liberals 58, and the Bloc Québécois 25. The Greens were too weak in British Columbia to re-elect Elizabeth May.

Harris-Decima's results would give the Conservatives 127 seats, the New Democrats 67, the Liberals 67, the Bloc Québécois 46, and the Greens one.

Quite a difference in results. Angus-Reid keeps the NDP in the Official Opposition role but unable to combine with the Liberals to out-number the Tories. Harris-Decima puts the NDP's status in question, while giving the Liberals and New Democrats enough seats to out-vote the Conservatives. But in both cases, the support of the Bloc Québécois would be needed for any working coalition.

The regional breakdown is as follows, with Angus-Reid first and Harris-Decima second:

If we take the best and worst regional results for the parties in these polls, we get an idea of a high and low range: 121 to 148 seats for the Conservatives, 61 to 89 seats for the New Democrats, and 53 to 72 seats for the Liberals.

In this context, it is difficult to see the Harris-Decima poll as a positive one for the New Democrats. They would probably be better off with the results from Angus-Reid, despite the wide gap between themselves and the governing Conservatives.

The polls certainly do not provide a lot of clarity as to what is going on. This is why I intend to start tracking the polls and maintaining an on-going vote aggregation (a more detailed version of my monthly averages), for the sole reason of making some sense of the numbers. I hope to have this up and running soon.

I had promised an update to the NDP endorsement rankings, but the only new endorsements to emerge since Wednesday were the six Nova Scotia MLAs plumping for Thomas Mulcair. I'll instead provide an updated tally tomorrow morning, when I begin my live-blogging (though here from home) of the NDP leadership convention, starting at around 9:30 AM. I intend to have plenty of charts and numbers to give you throughout the day as we track what is going on in Toronto.
Posted by Éric at 10:45:00 AM