A new poll by Justason Market Intelligence on the provincial voting intentions of British Columbians was released over the weekend, so what better time to check-in on the province and look at a Forum poll released at the end of February that had fallen through the cracks. You can also read my take on the numbers at The Huffington Post Canada here. 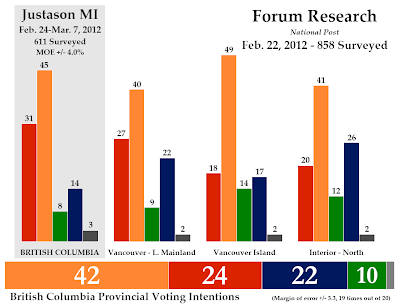 Let's start with the Justason numbers, which are the most recent. I don't have a poll from Justason in my database, and a look at the website tells me they haven't polled the provincial voting intentions of British Columbians for several years, if ever. They seem more concerned with Vancouver's municipal politics.

Nevertheless, Justason's numbers align generally well with the most recent polls we've seen from the likes of Ipsos-Reid and Angus-Reid since the beginning of 2012.

They have the B.C. New Democrats leading with 45% support, well ahead of the B.C. Liberals. They stand at 31%, trailed by the B.C. Conservatives at 14%. The Greens register 8% support.

This sort of split, with the Conservatives in the teens and the Liberals around 30%, seems to be the consensus opinion on what is going on in British Columbia with the notable exception of Forum's results, which have tended to up Conservative support at the expense of the Liberals.

Forum's poll has the NDP at 42%, up three points since they were last in the field on January 23. The Liberals are down two points to 24%, while the Conservatives are steady at 22% support. The Greens are up one to 10%. 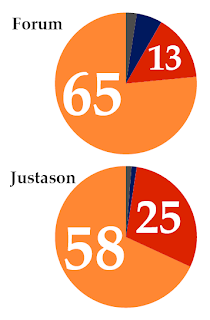 These polls result in mildly different legislatures. Forum sees the biggest romp for the New Democrats with 65 seats according to ThreeHundredEight's simple model (a full model has yet to be constructed), while the Liberals win 13 seats. The Conservatives take five seats while two independents are elected.

With Justason's numbers, the New Democrats still win a big majority with 58 seats, with 25 going to the Liberals and one apiece to the Conservatives and independents.

Vancouver delivers 25 seats to the NDP, with the Liberals taking 15. The NDP sweeps the Island, while taking 19 seats in the Interior/North to 10 for the Liberals and one for the Conservatives.

Either result is great for the NDP, while the Liberals would prefer to avoid the debacle of Forum's numbers. Being reduced to only 13 MLAs, with five Conservatives elected, would likely be a bit of a shock to the Liberals and a boon to the Conservatives. How the two parties would react is difficult to say, but it could begin the sort of three-party system most other provinces have, and one that would benefit the NDP in British Columbia.

As mentioned in my Huffington Post Canada article, both Christy Clark and John Cummins have net negative approval ratings, while Adrian Dix scores a net positive. But it is interesting to look at how supporters view the leaders. Both Dix and Cummins do very well among their supporters, with approval ratings of 74% and 75%, respectively. Clark, however, has the approval of 66% of Liberal supporters. That's not a huge gap, but the lack of enthusiasm certainly does not bode well for the party's chances in 2013.
Posted by Éric at 10:29:00 AM