For the first time in the NDP leadership campaign, Brian Topp has dropped from the first position in the endorsement rankings. He has given up the spot to Thomas Mulcair, who landed a slew of endorsements this past week from British Columbia, Manitoba, Ontario, and Quebec. 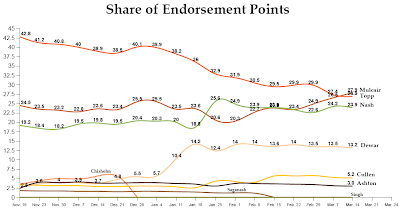 The most newsworthy and valuable endorsement for Thomas Mulcair came from Roméo Saganash, MP for Abitibi--Baie-James--Nunavik--Eeyou and former leadership candidate. However, his endorsement is not as valuable as it might have been - all of his former endorsers have gone elsewhere. And it is interesting to note that a lot of Saganash's team went over to the Paul Dewar camp.

The International Brotherhood of Electrical Workers Local 353 and the Retail, Wholesale, and Department Store Union of Canada gave Mulcair their labour support this past week. I have been unable to determine the size of IBEW Local 353, but RWDSU Canada (which is affiliated with the UFCW, also endorsing Mulcair) has 12,500 members. 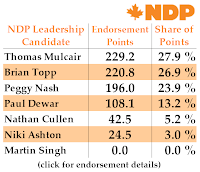 At 26.9%, Brian Topp is at his lowest point of the campaign. Though he did gain one endorsement point, he dropped 0.5 percentage points.

Peggy Nash gained two endorsement points but in the face of Mulcair's huge gain she dropped 0.3 percentage points to 23.9%.

Paul Dewar, Nathan Cullen, Niki Ashton, and Martin Singh did not land any new endorsements that were recorded by the rankings. Dewar has accordingly fallen 0.3 percentage points to 13.2%, while Cullen and Ashton fell 0.1 point each to 5.2% and 3.0%, respectively.

Does this mean that Brian Topp is no longer the establishment candidate? It is difficult to call Mulcair the anti-establishment candidate when he has racked up so many endorsements. He has the support of 43 caucus members (though only five of them are not rookies, no candidate has more than five "veteran" caucus endorsers), 11 provincial legislators, six current or former provincial party leaders, and 14 former MPs. His endorsements may not all have the cachet of an Ed Broadbent or a Roy Romanow, but he has lined up both newcomers and party elders to an impressive degree.

Of course, quality and quantity are two different things, and this is what the endorsement rankings attempt to measure. Topp does have the support of a Broadbent and a Romanow, as well as veteran caucus members, two other former leaders and a pile of provincial legislators and former MPs, including many well-known names. From a sheer numbers point of view, Mulcair has more support from within the party establishment. But from an influence perspective, Topp gets the nod.

And then there is Peggy Nash, who has landed a great deal of labour support. Though Topp and Mulcair have also gotten support from labour, Nash has the longest list that includes some of the country's largest and most powerful unions. She also has a great deal of support from women within the party - 13 of her 20 individual endorsers recorded in my rankings are women, a higher proportion that any other candidate by a significant margin.

Paul Dewar has a smaller number of supporters but many of them are veterans and influential within the party. Nathan Cullen has a very short and very B.C. list of endorsers, but the province has more members than any other in the country and Cullen appears to have the potential to be a real membership candidate. His establishment support is likely to turn out to be significantly smaller than his support within the rank-and-file.

This means that each candidate will have a solid chunk of first ballot votes, making the permutations of subsequent ballots difficult to predict. Will Cullen over- or under-achieve his now high expectations? Has Brian Topp been written off too early? Will Thomas Mulcair be able to attract enough second and third ballot support to put him over the 50% mark? What will be the names on the final ballot, and if it is going to be as close as some believe it will be, how important will candidate endorsements on the convention floor turn out to be? There may only be 10,000 or so ballots to cast on March 24 out of the 100,000+ expected to vote in the race, but they could make all the difference.
Posted by Éric at 9:53:00 AM