Three federal polls released over the past week indicate that the Conservatives hold an average lead of eight points over the New Democrats, suggesting that the recent robocall kerfuffle has had little effect on voting intentions. But the three polls also show a remarkable rebound for the Bloc Québécois in Quebec, with the party edging out the NDP in two of the three polls and averaging 31% to the NDP's 29%. 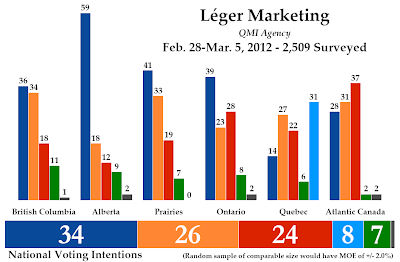 The poll by Léger Marketing is the oldest of the three, having been conducted between February 28 and March 5 for the QMI Agency. Their poll surveyed 2,509 online panelists.

Léger was last in the field at the pan-Canadian level between September 12-15, 2011. Since then, the Conservatives have fallen five points to 34%, with the New Democrats falling seven points to 26%. The Liberals are up seven to 24%, while the Greens are up one to 7%.

This poll generally aligns with what others have shown: a three-way race in Atlantic Canada, a neck-and-neck contest between the NDP and Conservatives in British Columbia, and a competitive race between the two parties in the Prairies. The Liberals hold second in Ontario and are performing well in Quebec, where the NDP and Bloc are maintaining around 30% support. 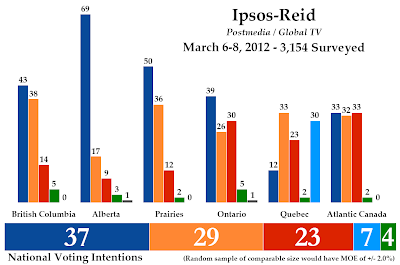 Ipsos-Reid was the next out of the gate for Postmedia and Global TV, surveying 3,154 Canadians in a hybrid telephone/online poll.

Ipsos-Reid was last in the field November 8-9, 2011 and since then the Conservatives have held steady with 37% support. The New Democrats are down two to 29% while the Liberals are up two to 23%. The Greens have increased their support by one point to 4%.

Again, we see the three-way race in Atlantic Canada, the NDP and Bloc at 30% or so in Quebec with the Liberals performing well, the Liberals holding second in Ontario, a close contest between the NDP and Conservatives in British Columbia, and a competitive NDP performance in the Prairies. 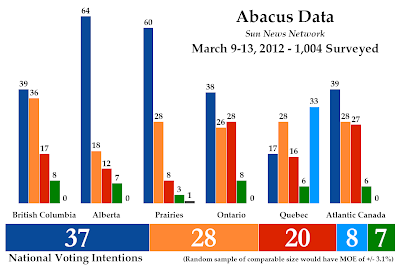 Abacus Data's numbers were out today for the Sun News Network. They have the newest set of numbers but their online poll is the smallest, though of standard size.

Abacus was last in the field January 16-19 and since then the Conservatives have held firm at 37% support. The NDP is also steady with 28%, while the Liberals are down one point to 20%. The Greens are unchanged at 7%.

But we still see some of the features of the other polls. The race in Atlantic Canada is less close, but the small sample size is likely to blame. The NDP and Bloc are at 30%-ish in Quebec, though the Liberals are not doing as well as they have elsewhere. Ontario is standard fare, as is Alberta and British Columbia, but the Conservatives hold a wide lead in the Prairies. Again, the sample size is smaller for this region.

But overall these three polls are in agreement. They put the Conservative lead at eight or nine points, with the Liberals far enough behind the NDP in two of three polls to confirm their third-place status. The results across the board are remarkably consistent with one another, particularly when taking into account the margins of error. 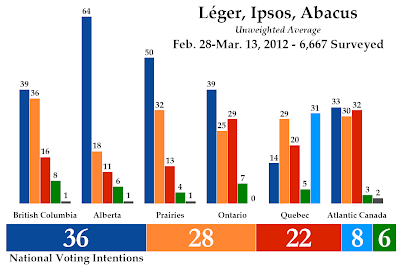 A straight-up average of the three polls, together taken over two weeks and surveying more than 6,000 people, puts Conservative support at 36%, with the New Democrats trailing with 28%. The Liberals stand with an average of 22% support, followed by the Bloc Québécois at 8% and the Greens at 6%.

In Ontario, the Conservatives lead with 39%, 10 points ahead of the Liberals. The NDP is not far behind the House's third party, with 25% support.

The Bloc Québécois holds a narrow lead in Quebec with 31% support, followed closely by the New Democrats at 29%. The Liberals stand at 20% while the Conservatives are well behind with only 14% support.

The race is close in British Columbia, where the Conservatives have 39% support and the New Democrats 36%. The Liberals have 16% support, double the 8% of the Greens.

Finally, in the Prairies the Conservatives sit at 50% to 32% for the NDP and 13% for the Liberals.

Generally speaking, aside from the Bloc's lead in Quebec, these three polls are well within the norm of recent weeks and even months. 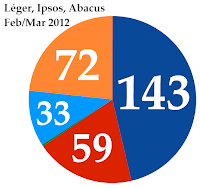 The average result of these three polls would give the Conservatives 143 seats, 12 short of a majority. The New Democrats would win 72 seats and the Liberals would win 59, with the Bloc Québécois taking 33 seats. The Greens hold on to their one seat in British Columbia.

The New Democrats win 13 seats in British Columbia, one in Alberta, seven in the Prairies, 23 in Ontario, 22 in Quebec, five in Atlantic Canada, and one in the north. They would likely win 78 seats in a 338-seat House of Commons, their share decreasing slightly from 23.4% to 23.1%.

The Liberals win three seats in British Columbia, one in the Prairies, 25 in Ontario, 13 in Quebec, 16 in Atlantic Canada, and one in the north. They would likely win 65 seats in the expanded House, giving them 19.2% of seats, no different from the 308-seat projection.

The Bloc wins 33 seats in Quebec and likely one more with the province's allotment increasing to 78 seats.

The return of the Bloc Québécois dramatically changes the make-up of the House. If the Bloc is pushed back down to 23% or so with those lost eight points going to the NDP (which, as one poll indicated, is what would happen if Thomas Mulcair becomes leader of the party), about 30 seats would flip back to the New Democrats, giving them over 100 seats in the House of Commons and, perhaps most importantly, the potential to join up with the Liberals to form a majority coalition government.

But with the Bloc Québécois back in the lead in Quebec, the opposition is again divided three-ways, forcing any co-operation between the NDP and the Liberals to rely on Bloc support. It does not change anything for the Conservatives as they are not a factor in the province and have a solid grip on their few Quebec seats. But any hope for an NDP majority, minority, or majority coalition with the Liberals becomes virtually impossible with the Bloc Québécois having a serious shot at one-third or more of the seats in Quebec.
Posted by Éric at 10:46:00 AM