Someone leads in Ontario

Two completely contradictory polls were released today, suggesting that the Ontario Liberals hold a 10-point lead over the Progressive Conservatives or trail by 12 points. There's no way to find a common thread in these polls, but perhaps something else is at play. 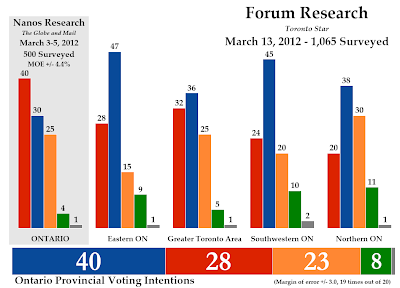 Forum Research released its poll to the Toronto Star today while Nanos Research's numbers appeared in The Globe and Mail.

Meanwhile, Forum has the Progressive Conservatives at 40%, up four points since their February 15 poll thanks to gains in suburban Toronto. The Liberals are down four points to 28%, dropping in the 905 and in northern Ontario, while the New Democrats are down three to 23%, in large part due to a slip in southwestern Ontario. The Greens gain three points to hit 8% support.

How can support differ by 10 or more points for the Liberals and the Progressive Conservatives in these two polls? Small differences are to be expected, even large differences can be within the margin of error. These are not, as you can only really stretch Liberal support down to 36% or so for Nanos and up to 31% for Forum, and PC support up to 34% for Nanos and down to 37% for Forum.

Nevertheless, comparing these polls is not exactly like comparing apples to apples. Nanos and Forum are two different firms using two different methodologies: live callers on the one hand and the IVR method on the other. Nanos surveyed 500 Ontarians while Forum surveyed 1,065. But most importantly, Nanos surveyed between March 3-5 and Forum on March 13 only. The field dates differ by as many as 10 days. Could opinion have shifted so violently? What was happening on those days?

When Nanos was in the field, the headlines were pretty good for Dalton McGuinty. He was criticizing Alberta, suggesting a wage freeze to teachers, and joining Jean Charest in harshly warning the federal government against off-loading costs to the provinces in a quest to balance their budget. All solidly populist fare.

When Forum was in the field, the headlines were pretty bad for the Premier. He was increasing the costs of driver's license renewals, talking about increasing revenues through new casinos, compromising on his green energy policy, and the ORNGE issue wasn't going away.

Perhaps that is too much to believe. But if we take into account the margin of error and the vastly different headlines between these two field dates, it doesn't look so unbelievable. Of course, if in a few months we see Nanos and Forum at odds against one another again, we will then have a good indication that one or the other (or both) is not gauging things correctly.
Posted by Éric at 2:05:00 PM