A new poll by Abacus Data for the QMI Agency indicates that the Progressive Conservatives are losing ground in Alberta, but unlike some other polls they appear to be losing some of their support to the provincial Liberals.

The projection has been updated to include this poll, and as a result the Tories have dropped 3.2 points in the projected popular vote to 38.7%, their lowest so far in the projection and the first time they have been pegged below 40%. Their range has tightened to 12 from 16 points as volatility as been reduced, but the range has moved in a negative direction: to roughly 33% to 45% from 34% to 50% on February 25.

The Progressive Conservatives have also dropped two seats and are now projected to win 65, thanks in large part to decreases in support in Calgary and the Rest of Alberta. Again their range has tightened, to 40 seats from 47, with the floor increasing to 36 from 34 but their ceiling decreasing to 76 from 81.

The beneficiary is not the Wildrose Party, which has gained only 0.3 points to hit 27.6% in the projection. That is their highest so far, but their range has decreased to the point where it no longer overlaps with the Tories. The highest projected range is 30.6%, 2.1 points below the low range of the PCs. Wildrose has picked up a seat, however, in the Rest of Alberta where the Tory drop has been most severe (it happens to be the seat that Danielle Smith will be contesting).

Instead, the Liberals have made the biggest step forward, increasing their support by 2.6 points in the projection. They now stand to take 16.3% of the vote, with their range now between 13% and 19%, up from 12% to 15%. They are now projected to win two seats, but their high range has doubled to 10 seats from only five. The Liberals have had their support increase across the board: 3.4 points in Edmonton to 19.7%, putting them in second, 3.4 points in Calgary to 16%, and 2.6 points in the Rest of Alberta to 12.6%. Though they are currently only projected to win seats in Edmonton and Calgary, their ranges put them in play in pockets throughout the province.

The New Democrats are up by 0.4 points to 12.7%, with their range standing at between 12.2% and 13.2% support. They remain projected to win three seats, but their high range has increased to six from four on February 25. But it is not only good news for the NDP, as they have dropped a point in Edmonton to 14.8%. However, they also gained 1.1 points in Calgary and 2.2 points in the Rest of Alberta. 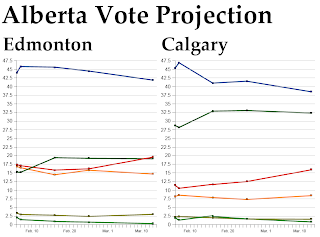 The most important movement is taking place in the two cities. You can see that the Tories have been on a slow decline in Edmonton and that they have fallen more sharply in Calgary.

But aside from an initial uptick in mid-February, Wildrose has been holding steady despite the slip in PC support.

The New Democrats have been relatively steady as well in both cities, but it is the Liberals who have made gains, surpassing Wildrose in Edmonton and continuing their consistent increase in support in Calgary. As these are the two cities where the Liberal and NDP opposition have the most to gain, this is important to watch. 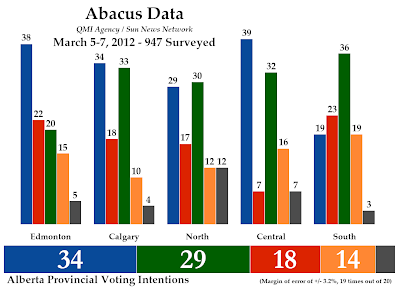 This is the first time that Abacus has reported on the situation in Alberta, and they are using a new method for this campaign. The polling firm usual uses an online panel, but this time they used the IVR method, as they will be doing throughout the Alberta campaign.

The Edmonton and Calgary numbers in this poll are generally what we've seen elsewhere, though the New Democrats are looking weaker in Edmonton than the norm and the Liberals are looking stronger in both cities. But the dead heat between the Tories and Wildrose in Calgary is nothing unusual.

The results in the rest of the province are drawn from smaller samples, but are also somewhat standard. The Tories are running low in northern Alberta, but some of their usual support may have been drawn off by that large "Another party" result. The New Democrats are looking surprisingly competitive outside the two main cities, while the Liberals and Wildrose are both doing best in southern Alberta, as should be expected. That the Tories are doing so badly, however, is somewhat of a surprise and a potential problem for Alison Redford.

If we meld the three regional results together, we get 33% for Wildrose, 30% for the Tories, 16% for the NDP, and 15% for the Liberals in the Rest of Alberta. That means a big drop in support for the PCs to the benefit of all three other parties.

This could be due to Redford's negative favourability numbers. Abacus found that 29% of Albertans have a favourable opinion of the PC Leader, compared to 31% who have unfavourable opinion. Another 31% were neutral.

Raj Sherman of the Liberals and Brian Mason of the NDP also had net negative numbers, with Sherman scoring 22% favourability to 27% unfavourability and Mason splitting 20% to 25%. Only Wildrose Leader Danielle Smith had net positive numbers: 31% favourable to 23% unfavourable.

Smith also scored best among her supporters: 77% of Wildrose voters have a favourable view of her compared to only 3% who don't. Mason also does well among his supporters with 68% favourability, but Redford (57%) and Sherman (56%) should be doing better within their own voting pool.

That is not to say that Redford and Sherman are seen unfavourably by their own supporters. No party leader had a higher than 5% unfavourability rating among their own voters. But their lower favourability results could have a negative effect on the enthusiasm of their voters. 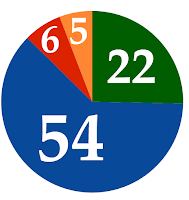 This Abacus poll would result in a much larger opposition than my current projection forecasts, with 22 Wildrose MLAs, six Liberals, and five New Democrats. But the Progressive Conservatives would still win a majority with 54 seats.

The Tories dominate in Edmonton with 22 seats to four for the NDP and three for the Liberals, while they also do well in the Rest of Alberta: 18 PCs to 10 Wildrose, two Liberals, and one NDP.

But the real contest is in Calgary, where the Progressive Conservatives win only 14 seats. Wildrose wins 12 and the Liberals one, the governing and opposition parties splitting the city in half.

Abacus and, by extension, ThreeHundredEight's projection model show a much closer race than might have been expected only a few months ago. But the Progressive Conservatives still hold a huge advantage, even with a lead of only five points. Wildrose is, so far, unable to break into Edmonton where one-third of the legislature's seats are located, and as neither the Liberals nor the NDP can alone corner the centre-left opposition vote, the Tories are able to cruise well over 20 seats in the capital. That makes the competition in Calgary and the Rest of Alberta less important than it might be, as the Tories can get away with winning little over one-third of seats in these parts of the province and still form a majority government.

Though the polling volatility has somewhat calmed, there is enough of it that, coupled with the uncertainty programmed into the model, the possibility for a Wildrose minority does exist. It is very remote, however, as the chances of a PC victory are something along the lines of 87% at this stage. But it can also go very wrong for Wildrose, as their is a slim chance that the Liberals could hold on to the Official Opposition role by the skin of their teeth over Danielle Smith. And to complicate matters further, the Liberals could still fall behind the NDP to sit as the fourth party in the legislature, if they sit at all.

In other words, there is still a lot that has to play out and the order of the four major parties is far from certain. And with the news recently turning sour for the Progressive Conservatives (Gary Mar's fundraising, Alison Redford's pay for a non-sitting committee), the race could become even closer.
Posted by Éric at 9:22:00 AM