Nanos Research reports today that support for the Conservatives hasn't changed a bit over the last month, despite allegations of impropriety during the last federal election.

Just how successful might this impropriety have been? My article for The Globe and Mail today shows that it might not have been very successful.

You can also read my article for The Huffington Post Canada on this Nanos poll and the recent EKOS poll here.

Before getting to the Nanos poll, a few words on my article for the Globe. I've already seen a lot of comments emphasizing the point made in the headline, that turnout was higher in allegedly robo-called ridings than in other ridings. But the most interesting aspect of my analysis, at least in my view, is further down the page, seemingly confirming my fear that too many people only read the headline and the first paragraph before coming to a conclusion about what an article says.

The point I make is that turnout was higher, yes, but likely because the ridings allegedly targeted are competitive. The margin of victory in the robo-call ridings was roughly half of the margin of victory in other ridings. So while this might not tell us whether this alleged tactic was successful or not, it does appear to suggest why these ridings were allegedly targeted. 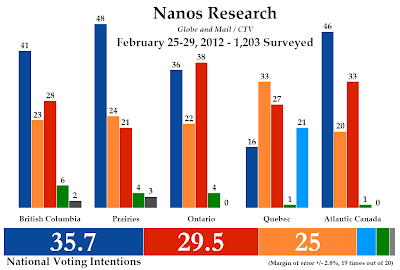 Now to this Nanos poll. It shows that the Conservatives are unchanged since Nanos was last in the field January 20-23. They still have the support of 35.7% of Canadians.

As I mention in the Huffington Post article, Nanos has often registered Liberal support higher than other pollsters. That does not mean they are wrong (the others might be wrong, or the truth somewhere in the middle), but it does reduce the significance of the Liberals placing second and the NDP third. The polls do not consistently show this to be the case, so at the very least we can say that the race for second is probably tight.

The Tories also lead in Atlantic Canada with 45.6%, up 16.1 points. The Liberals are down 0.3 points to 33.3% while the NDP is down 14.9 points to 20.3%. Wild swings like this, combined with the small sample, make the meaning of these numbers relatively low. 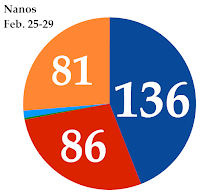 With these numbers, the Conservatives would win 136 seats. They would likely be toppled by the Liberals and the New Democrats, who combine for 167 seats. But in contrast to some other polls, this one results with the Liberals at the top of the duo with 86 seats to the NDP's 81. The Bloc Québécois would win four seats and the Greens one.

The Conservatives win 22 seats in British Columbia, 25 in Alberta, 17 in the Prairies, 46 in Ontario, seven in Quebec, 18 in Atlantic Canada, and one in the north.

The Liberals win eight seats in British Columbia, two in Alberta, six in the Prairies, 43 in Ontario, 18 in Quebec, nine in Atlantic Canada, and one in the north.

The New Democrats win five seats in British Columbia, one in Alberta, six in the Prairies, 17 in Ontario, 46 in Quebec, five in Atlantic Canada, and one in the north.

In Nanos's Leadership Index (a combination of percentages on the questions of trust, competence, and vision), Stephen Harper tops the list with 102.4 points, compared to 54.4 for Bob Rae, 24.6 for Elizabeth May (rocketing up to third!), 20.3 for Nycole Turmel, and 11.7 for Daniel Paillé.

This poll points to stability - not exactly the replacement of the NDP as the Opposition by the Liberals. Nanos's last poll also showed that. In today's volatile climate, this lack of change is somewhat surprising. It will be more surprising if this persists straight through to the NDP leadership convention and the budget at the end of March.
Posted by Éric at 10:54:00 AM