EKOS Research and iPolitics.ca released a new federal voting intentions poll today, showing that the Liberals have dropped more than three points since December and that the Conservatives and New Democrats are running neck-and-neck. 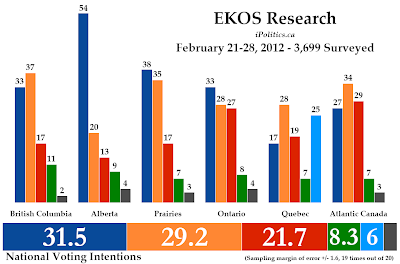 EKOS also makes a distinction between eligible voters and likely voters, which they define as people who voted in the May 2 election. It doesn't show major differences this time, however: 32.1% for the Tories, 28.9% for the NDP, and 22.3% for the Liberals. There are no regional breakdowns of likely voters in the EKOS report.

The New Democrats lead in Quebec with 28.3%, down 6.1 points since the end of December. This seems to corroborate the slip in support that other polling firms have recorded in Quebec. The Bloc is running second in the province with 25%, down 2.4 points, while the Liberals stand at 19% (+0.3) and the Tories at 17.2% (-3.3). 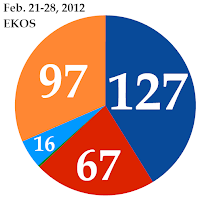 With these levels of support and using the current 308-seat electoral map, the Conservatives win 127 seats. The New Democrats win 97 and the Liberals 67, giving them a total of 164 seats and enough to govern in tandem with a majority. The Bloc Québécois reaches official party status with 16 seats, while the Greens retain their one seat.

The Tories win 16 seats in British Columbia, 27 in Alberta, 13 in the Prairies, 52 in Ontario, eight in Quebec, 10 in Atlantic Canada, and one in the north.

The New Democrats win 15 seats in British Columbia, one in Alberta, 10 in the Prairies, 24 in Ontario, 38 in Quebec, eight in Atlantic Canada, and one in the north.

The Liberals win four seats in British Columbia, five in the Prairies, 30 in Ontario, 13 in Quebec, 14 in Atlantic Canada, and one in the north.

With 338 seats in the House, a rough estimate gives the Conservatives 143 seats, the New Democrats 105, the Liberals 72, the Bloc 17, and the Greens one. So, still enough for an NDP/Liberal majority. But the new seats to be created in Conservative-friendly provinces give them more of an edge - whereas they would hold 41.2% of the seats in the 308-seat House of Commons, that percentage would be increased to 42.3% in the 338-seat legislature. The NDP drops from 31.5% to 31.1% while the Liberals drop from 21.8% to 21.3%.

EKOS also broke down support by how people voted in May 2011, and the results are a little interesting. Generally, all parties but the Greens have retained over 2/3rds of their supporters. But all parties have also picked up a handful of supporters from their rivals, with no real pattern: New Democrats and Liberals to the Tories, Tories and New Democrats to the Liberals, Liberals and Tories to the NDP in roughly equal numbers. The only difference, perhaps, is that the Bloc seems to be doing best among NDP and Green supporters. It's all a little confusing.

What is also somewhat confused is the gap that currently exists between the Tories and the NDP. Is it the 2.3 points that EKOS finds among eligible voters, the 3.2 points it estimates among likely voters, or the eight to 10.5-point gap that the recent surveys from Forum and Nanos identified? It is difficult to argue that the gap is closer to EKOS's findings, as EKOS pegged it as 1.9 points back in December when other polls taken around the same time put it at between five and eight points. In other words, EKOS is showing general stability in voting intentions for the NDP and Conservatives, as other firms have shown. That is most likely what is going on.
Posted by Éric at 11:18:00 AM