Angus-Reid has a new poll out, and it doesn't show much of a change. But it does ask some interesting questions. 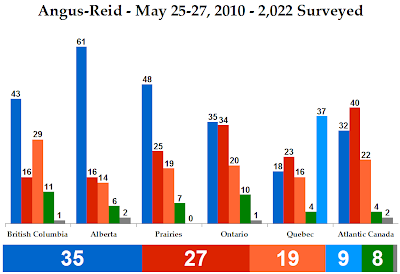 Compared to their last poll of late April, the Conservatives are steady at 35%. The Liberals have dropped one to 27% and the New Democrats are steady at 19%.

The Bloc Québécois is down two to 9% and the Greens are up one to 8%.

In Ontario, the Conservatives have gained one point and the lead, with 35%. The Liberals have lost three and are down to 34% while the NDP is up three to 20%.

A decent poll for the Tories, but a bad trend in BC and not-good-enough numbers in Ontario and Quebec. 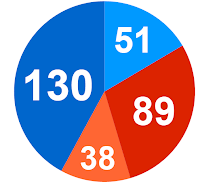 Now, on to the interesting part of this poll.

Angus-Reid asked how people would vote if the Liberals and NDP merged - a topic that has been in the news lately. They proposed three leaders for this coalition party: Michael Ignatieff, Bob Rae, and Jack Layton.

Led by Michael Ignatieff, this LPC/NDP would not do much better than the two parties do individually right now. Conservative support would be bumped up to 40% while Ignatieff's party would be at only 34%. The race would only be made closer in Ontario, where the Tories would still be ahead 42% to 41%. In Quebec, the Bloc would still dominate with 42%, followed by the LPC/NDP with 28%. The party would have a lot of success in Atlantic Canada, however, with 52% support. 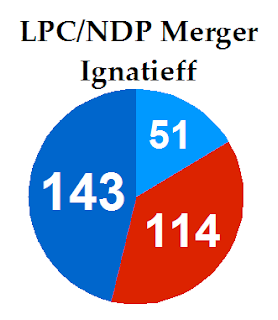 But in the end, it would only give the party 114 seats, pretty much what the two parties have right now. Stephen Harper would still be Prime Minister with 143 seats, while the Bloc would gain a couple to stand at 51 seats. So, from this perspective, an Ignatieff-led merger would accomplish nothing.

So, let's assume that the two parties agree to only work together under Bob Rae, who has a background in both parties. Maybe Ignatieff and Layton become deputy-leaders. Unlikely, but why not.

This scenario would turn out much better for the merged party. They would tie the Conservatives with 38% nationally. More importantly, British Columbia would be split 45/36 in the Tories' favour (still close) and Ontario would vote for Rae at a rate of 45% to 39%. The party would take 30% of the vote in Quebec (though the Bloc would still be in front with 45%), but oddly enough Rae would not be as successful as Ignatieff was in Atlantic Canada, with 48% to the Tories' 40%. 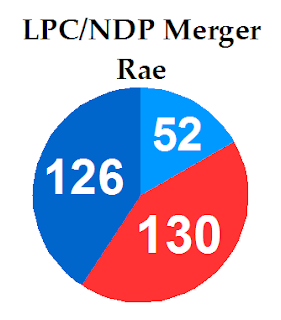 With Rae as leader, the LPC/NDP party would squeak out a slim minority of 130 seats to 126. The Bloc would be at 52. So, this scenario would certainly change things but would be relatively unstable. Putting Peter Milliken back in the speaker's chair would reduce the plurality to three.

But what if Ignatieff stepped aside and allowed Jack Layton, who is more personally liked by Canadians, to become leader of this new party. Well, we would probably be calling Mr. Layton our next Prime Minister.

Still, they wouldn't lead in British Columbia, where the Tories would take 49% to the coalition's 36%. But they would have a shot in Alberta with 26% and the Prairies with 43% (to the Tories' 50%). They would dominate in Ontario with 47% support and actually win in Quebec with 44%. The Bloc would be reduced to 34% here, demonstrating how a good number of Bloc supporters are social democrats at the federal level first and foremost. Atlantic Canada would be easy-peasy, with 56% support. 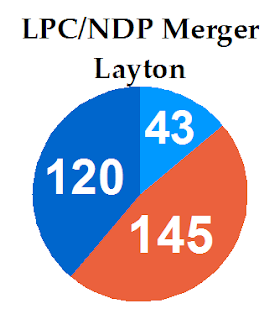 A LPC/NDP merger under Layton would win 145 seats, while the Conservatives would take 120. The Bloc would elect 43 MPs. Still, no majority, but a good sized caucus.

Obviously, only the first scenario is likely. I can't imagine that Michael Ignatieff would step down in order to merge the two parties under Bob Rae. That name was just plucked out of nowhere by Angus-Reid, as he has made no statements to indicate he is out for Ignatieff's head. And it would be highly unusual for the leader of the smaller party in the merger to emerge as overall leader. But, this poll does seem to show that Canadians aren't as afraid of the idea of a Prime Minister Jack Layton as the Conservatives pretend they are.

Food for thought. I was wondering how long it would take for a pollster to ask this very interesting question!

As a side note, here in southern Ottawa the air is smokey and it smells like barbecue. It is amazing that the smoke of forest fires north of La Tuque can drift all the way here.
Posted by Éric at 9:29:00 AM