Time to look at April's polling. Nine national polls were taken during this month (the same as last month), totaling about 14,390 interviews. Here are the results we get at the national level, with the difference from last month's average in brackets.

After a couple months of gains, the Conservatives take a small step backwards. This is compensated by an even larger Liberal loss. Over the last two months the Liberals have dropped 3.4 points. Compare that to the Conservatives, who in that time span are up 0.2 points. The New Democrats are up again, gaining almost an entire point in the past 60 days. The Greens are up a point this month. 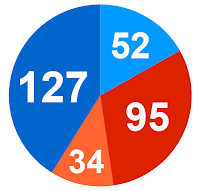 The Conservatives make a modest seat gain, thanks to increases in Ontario and Atlantic Canada. The Liberals are down big, once again, now down 14 in the last two months. The Bloc solidifies it's hold on Quebec while the NDP makes a big gain thanks to wins in every part of the country. 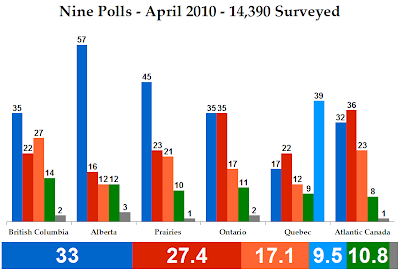 The Conservatives remain virtually unchanged in the province. The NDP is up big after a month of stagnation. The Liberals are down again, making that a loss of 4.1 points in the last two months. The Greens are steady, but that is coming off a gain of 1.1 points last month.

The Conservatives are steady, which in a small region like Alberta is relatively remarkable. The Liberals are really starting to lose the decent level of support they had built in the province, as they have lost more than five points in the last two months. The NDP seems to be taking advantage, as they have gained almost two points in the last month. They haven't re-taken third spot, however, which remains in the hands of the Greens.

The Conservatives take another hit, and have lost 2.5 points in the last two months. The Liberals have shown another month of gain in Saskatchewan and Manitoba. The NDP seems to have bounced back and have re-gained the losses they sustained in March. The Greens fall back a little.

The Conservatives take 67 in the West (unchanged since March), while the Liberals win 15 (down two) and the NDP wins 13 (up two).

The Liberals have lost three points in the last two months, and are now tied with the Tories. The Conservatives drop a little, but it only cancels out their gains of March. The NDP is up, and is now up 1.7 points in two months. The Greens make a tidy gain as well.

The Liberals re-gain their footing, but it doesn't make up for their two point loss in March. The Conservatives take a step forward after last month's step backwards. After looking like the ship was turning for the NDP in Atlantic Canada, they head in the wrong direction. 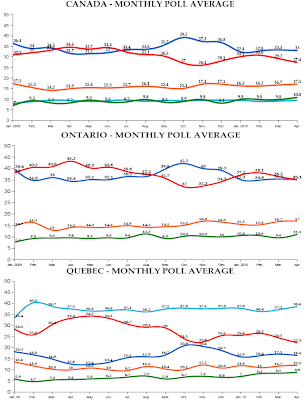 The big winners in April were clearly the New Democrats. They saw improvements in five of the six regions of the country, making significant gains in the Prairies, Alberta, and especially British Columbia. Their loss in Atlantic Canada, however, is a problem.

Then it would be the Greens, who made gains in five of the six regions. The problem is that the only place they really need to make gains is in British Columbia, and they were only up 0.1 points there.

Both the Conservatives and Liberals had a bad month. Both saw losses in four of the six regions of the country. The Conservatives did make a decent gain in Atlantic Canada, however, and their losses in Ontario and British Columbia were negligible.

That can't be said for the Liberals, who saw significant drops in support in Quebec, Ontario, Alberta, and British Columbia.
Posted by Éric at 10:40:00 AM