Environics released a new poll for the Calgary Herald on Monday, looking into the provincial voting intentions of Albertans. Compared to their last poll in late October 2009, there hasn't been much change. 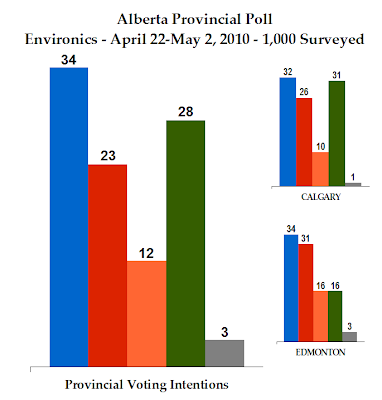 Both the Progressive Conservatives and the Wildrose Alliance remain unchanged at 34% and 28%, respectively. The Liberals have gained three points to reach 23%, as have the New Democrats at 12%.

In Calgary, the PCs are up two points to 32% while the Wildrose Alliance is down three points to 31%. The Liberals make it a close race at 26%.

In Edmonton, the PCs are stable at 34% but the Liberals are up four to 31%. The WA and NDP are tied at 16% in the provincial capital.

Finally, in the rest of Alberta the Wildrose Alliance has jumped five points to tie the Progressive Conservatives at 37%. The governing party is down one point here.

According to Janet Brown, a polling consultant interviewed by the Calgary Herald, this poll would give the Progressive Conservatives 45 seats, the Wildrose Alliance 18 (four of them in Calgary and the rest in southern Alberta), the Liberals 16, and the NDP 4.

Compared to the 2008 election, that would be a 27-seat drop for Ed Stelmach. It would also be a gain of seven seats for the Liberals, two seats for the NDP, and 18 for the Wildrose Alliance. For the two traditional opposition parties, this would be a return to their 2004 electoral results.

I plan to develop my own projection model for the province once we near the next election.

Stelmach has had some terrible polls recently, so it is certainly good news for him to have the lead. It could be that Environics has had different results than other pollsters, or it could be that between the two Environics polls in October and now May, the Wildrose Alliance saw a bump (39% in November and 42% in February, according to Angus-Reid) but they have since returned to earth. If that is the case, it is most definitely good news for the beleaguered premier.
Posted by Éric at 9:26:00 AM