My apologies for not getting to this sooner - I was in Kingston attending a convocation ceremony at Queen's University, my alma mater. I mention this as former Prime Minister Paul Martin received an honourary degree at the ceremony. He gave a short speech, highlighting the importance of ethics in business, in being able to recognize "paradigm shifts", and the importance of public service. A few jokes were cracked, at each other's expense, between Martin and Chancellor David Dodge.

On Thursday, Harris-Decima released a new federal poll, showing the Conservatives up and the other parties down. 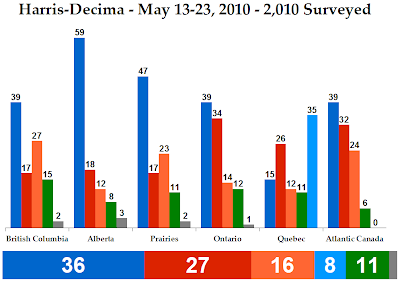 Compared to their last poll (whose survey period staddled this one's a little), this is a four point gain for the Tories, who are now at 36%. The Liberals are down one to 27% and the New Democrats are down one to 16%.

The Greens are stable at 11% and the Bloc Québécois is down two to 8%. For the "other" parties in my chart, I merely gave them the leftovers as Harris-Decima doesn't report on voting intentions for "other".

This is a big poll for the Conservatives, but it is still not good enough to get them to a majority. A quick comparison with the 2008 election results shows that the Tories still aren't at that level, while the Liberals are doing slightly better. That equates to a smaller mandate than the one the Tories won in 2008.

In Ontario, the Conservatives steal four points from the Liberals and now lead with 39% to 34%. The NDP is stable at 14%.

In Quebec, the Bloc is down five to 35% while the Liberals are up six to 26%. That is a huge result for them, as they have been struggling at around 20% for several weeks. The Conservatives are up one to 15% and the NDP is up two to 12%.

The Conservatives have gained five points in Atlantic Canada and lead with 39%. They also lead in the Prairies with 47%, where the Liberals have dropped six to 17%. The Tories are also in front in Alberta, up eight to 59%. 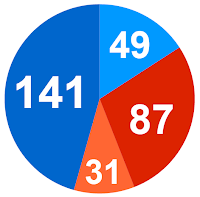 The Conservatives win 70 seats in the West, 54 in Ontario, 5 in Quebec, and 12 in Atlantic Canada for a total of 141. Note that if the Conservatives were doing as well in Quebec as they did in 2008, they would have surpassed that election's overall result.

The Liberals, taking advantage of the NDP being several points down (notably in Ontario), win 11 seats in the West and North, 41 in Ontario, 19 in Quebec, and 16 in Atlantic Canada for a total of 87.

Harris-Decima's last poll resulted in seat totals of 120 CPC, 101 LPC, 54 BQ, and 33 NDP. So, obviously the Conservatives have made gains at the expense of everyone else.

Despite the good tidings in this poll for Stephen Harper, this is still a worse result than in 2008 - so it does no good for him. It also doesn't change the situation enough for the other parties, as the Bloc looks to tread water and the NDP looks to suffer some modest losses. A gain of a few MPs is not reason enough for the Liberals to want an election, so it looks like the status quo for now.
Posted by Éric at 10:02:00 AM