Léger Marketing's latest provincial voting intentions poll in Quebec shows little change, but the Action Démocratique is up a little. 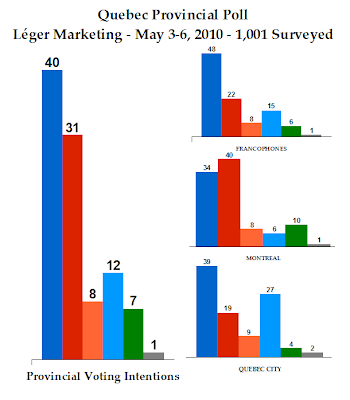 The Parti Québécois leads with 40%, unchanged since Léger's poll at the beginning of April. The Liberals are up one to 31%.

The ADQ is up two points to 12%, more in line with where they were when Mario Dumont was leader prior to 2007. It isn't surprising to see the ADQ back up to this level, as the Liberals have removed themselves as an option in light of the recent scandals and corruption allegations.

In Quebec City, the PQ has a solid lead with 39%, unchanged since April. The ADQ is back up and competitive with 27% around the capital, up nine points. The PLQ follows with 19%, down six.

Pauline Marois of the PQ is the favourite for Premier with 26% (down one). Jean Charest, current Liberal premier, is next with 18% (up one). Amir Khadir (QS, up one) is at 9%, and Gérard Deltell (ADQ) follows with 6% (down one). 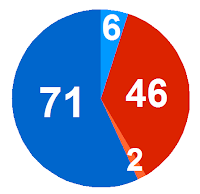 The Parti Québécois would win 71 seats, followed by the Liberals with 46, the ADQ with 6, and QS with 2.

The PLQ can be happy that the bleeding has stopped, at least for now. But losses among francophones and around the capital hurt the party.

This is a good poll for the PQ, as they have maintained their lead and have either made gains or stayed stable among francophones, in Quebec City, and in the "rest of Quebec". Those are the PQ's areas of strength.

It is also a relatively positive poll for the ADQ, as they back to being a factor around the capital and outside of Montreal.
Posted by Éric at 8:29:00 AM