EKOS has its weekly poll out, and it shows gains for all three of the main national parties. 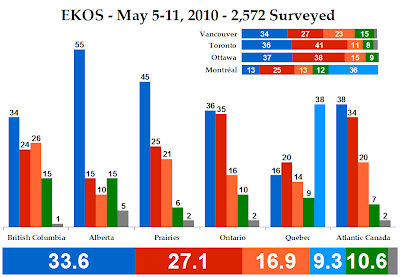 Like other polls have shown, Conservative strength is based on male support. Among males they are at 37.4%, compared to 29.7% among females. The Liberals split 29.7% to 28.2% among males and females.

The Conservatives lead in Atlantic Canada with 37.8% (which is actually where they were last week), Alberta with 55.4% (up five), and in the Prairies with 45.4%. The Liberals are down five points to 25.3% there.

Significantly, the Liberals do not lead in any region of the country. 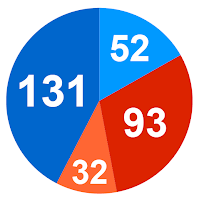 A recent change in the poll projections is that the Liberals and NDP now no longer out-number the Conservatives. At this rate, though the Tories look to have some losses in both seats and support, they would still be safe as a minority government.

Both the Conservatives and the Liberals are starting to show some life, but they are still well below where they want to be.
Posted by Éric at 10:06:00 AM