Nanos Research recently released two polls, one on the top issue facing the country and the other on opinions of the party leaders.

EDIT: Because of an error on my part, reversing the numbers for Layton and Ignatieff, I've re-written part of this post.

We'll start with the issue poll, since it actually marks a big change in how Canadians are feeling right now. This was an unprompted question, so Canadians were free to respond however they liked.

Healthcare is now the biggest issue facing the country, at 22.8% (up about three points since Nanos last asked the question). Jobs and the economy is at 18.6%, down almost six points. 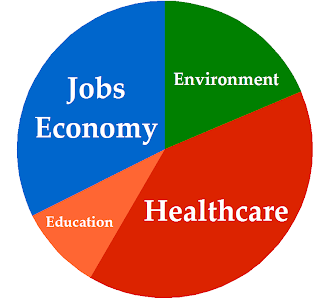 This marks a big change, since in early 2009 "jobs/economy" peaked at well over 50%. But ever since then it has dropped and is now considered to be the second most-important issue facing the country.

It makes you wonder if the parties, and in particular the Conservatives, will change their tune.

Every other issue has been relatively stable over the past few years, though there was a brief surge in concern over the environment, which has since dropped to 10.8% (though that is up three). Healthcare was the dominant issue back in 2004, when it was at 45%.

Education is only the top issue of 5.4%, indicating that we're far more concerned with how we're going to die than how the country's future is going to look.

But what about who Canadians feel is best equipped to handle these issues? Well, there hasn't been much change, but for once Michael Ignatieff is on the up-swing. 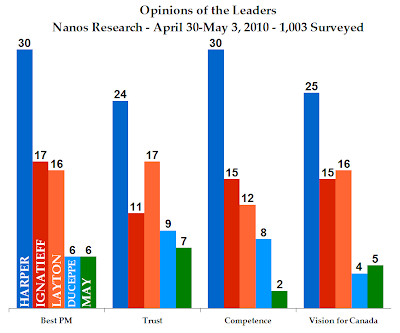 Stephen Harper is still considered the best man for the job he currently has, with 29.5% saying he is the best for Prime Minister. However, that is down from 32.0% in February.

Ignatieff performed best in Ontario with 23.5%, but worst in the Prairies with 10.9%.

As to the questions of trust, competence, and having a vision for Canada, Harper comes up aces - but significantly his scores for "trust" (23.9%) and "vision" (25.1%) were below his score for Best PM. Apparently, people think he is competent and a good administrator, but not exactly trustworthy or inspiring.

Duceppe earned some praise in the ROC, with 9% trusting him most and 8.2% saying he is most competent. Strangely enough, only 3.9% consider him to have the best vision for Canada. The mind boggles.

So, what to take from these polls. Healthcare and the economy are still the major issues in this country, and our political leaders are generally unliked.