On Saturday, Ipsos-Reid released a new poll, and my apologies for not posting about it sooner. One of my intrepid readers alerted me to it, and I thank her for that. 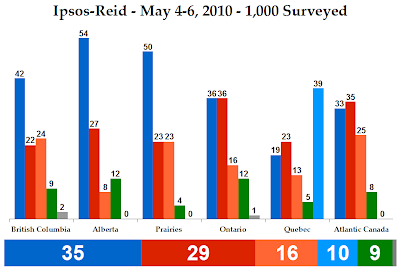 Ipsos-Reid's last poll was taken between April 20-22, and compared to that one there has been very little change at the national level. The Conservatives, Liberals, and New Democrats remain unchanged at 35%, 29%, and 16%, respectively.

In Ontario, the race has tightened as the Liberals have dropped three points to 36%. The Conservatives have gained one point and stand at 36% as well. The NDP is up one to 16%.

In British Columbia, the Conservatives are well ahead with 42% (up three). The NDP (24%) is down three and the Liberals (22%) are down two. The Greens are down a point there to 9%.

Support seems to divide along gender lines, as the Conservatives lead among males with 41% to the Liberals' 30% and the NDP's 15%. Among females, the Tories and Liberals are tied at 29% while the NDP is at 18%. Liberal, and to a lesser extent NDP, support is uniform, while the Conservatives have constructed their lead on male voters. 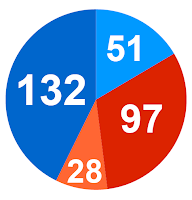 The Conservatives still take a hit compared to their present caucus, but the Liberals and NDP only combine for 125 seats.

There's one thing odd I noticed about this pollster's questions. They prompt for parties, but use different wording. When they list the parties, the say "The Conservative Party", "The New Democratic Party", "The Green Party", and "The Bloc Quebecois".