EKOS has its weekly poll, and it shows a big drop for the Liberals and New Democrats, with gains coming to the Conservatives and the Bloc Québécois. 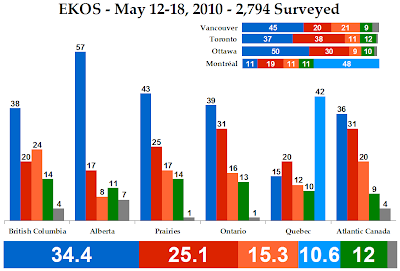 This is a horrid number for the Liberals. Just terrible. And the NDP number is very bad as well. The Conservative lead is excellent, but they still aren't strong enough to eke out a majority.

This is a very good poll for the Tories - except they are still not doing well enough in Quebec. 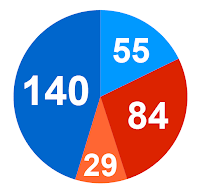 The Bloc wins 55 seats, their best ever.

This would be an odd result for everyone. The Conservatives actually lose seats and a good chunk of popular support, but still form a comparable government to the one they have today. The Liberals make a few gains with less support, but are still very far from where they need to be. The NDP takes a big hit in support and MPs, while the Bloc stands to be the only party to make significant gains.
Posted by Éric at 9:24:00 AM