Harris-Decima has a new poll out, and it shows some growth for both the Liberals and the Conservatives at the expense of the New Democrats. 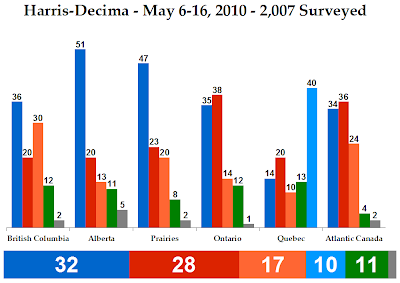 Compared to Harris-Decima's last poll, taken between April 15 and April 25, this is a three point gain for the Conservatives, who now lead with 32%. The Liberals are up one to 28%, while the NDP is down three to 17%.

In Ontario, the Liberals have gained two points and lead with 38%. The Conservatives are also up, four points to 35%. The NDP is down five to 14% here.

In British Columbia, the Conservatives have re-gained the lead with a six point bump to 36%. The NDP is down one to 30% and the Liberals are down one to 20%. The Greens are down six to 12%.

Elsewhere, the Liberals lead in Atlantic Canada with 36%, the Conservatives are at 51% in Alberta (down five), and they also lead in the Prairies with 47% (down eight). The Liberals are up seven to 23% there and the NDP is down 11 to 20%. 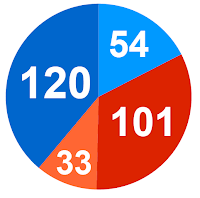 The Bloc wins 54 seats in Quebec, matching their record.

Harris-Decima's last poll resulted in seat totals of 104 Conservative, 101 Liberal, 56 Bloc, and 46 NDP. So, the Conservatives make most of their gains off of the NDP.

The poll also looked into favourable and negative opinions of the party leaders.

The most liked leader is Gilles Duceppe (at least based on his Quebec numbers). Fifty-two percent of Quebecers have a favourable opinion of him, compared to 32% negative (also a best).

Layton is well-liked, and Ignatieff can at least find solace in that he is disliked as much as Harper is. But he needs to do much better than 26% - that is below his party. Even Harper's rating is 131% of his party's support.
Posted by Éric at 1:27:00 PM