NDP Still Lead in BC

I hope everyone had a wonderful Victoria Day/Journée nationale des patriotes long weekend!

On May 20, the Mustel Group released a new poll on the provincial voting intentions of British Columbians. It shows very little change. 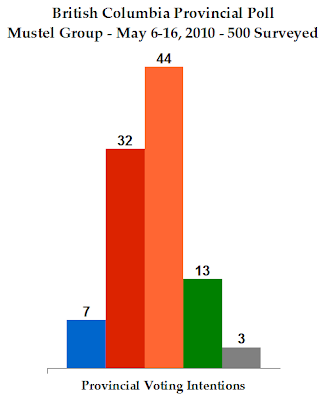 Compared to Mustel's last poll in November 2009, the New Democrats have gained one point and now lead with 44%. The governing BC Liberals are 12 points behind with 32%, down three points.

The Greens are down two to 13% while the BC Conservatives are up five to 7%.

Not to compare apples to oranges, but the last BC poll (by Angus-Reid in April) had the NDP at 47%, the BC Liberals at 29%, the Greens at 14%, and the BC Conservatives at 5%. So, this Mustel poll seems to confirm the general situation in the province right now.

NDP leader Carole James, on the other hand, is showing modest improvement. Her approval/disapproval rating is now 40/35, compared to 39/37 in November.

Things continue to look dire for Gordon Campbell, but he still has, oh, three years to turn things around.
Posted by Éric at 9:50:00 AM