As you'll recall, last month I took a look at what was the potential best result for each of the parties in terms of seat wins. As I only had a couple hours of sleep last night, I'll copy-and-paste my explanation from that post: 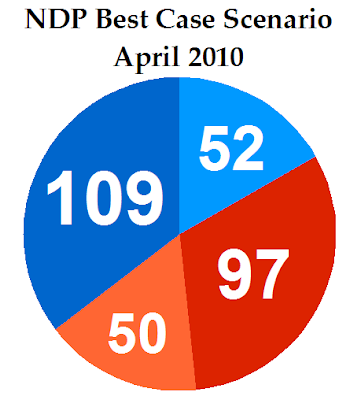 With 21.5% support nationally, the New Democrats would elect 50 MPs and set party records.

Nevertheless, they still would be the fourth party in the House of Commons, two seats behind the Bloc Québécois. Their strong performance is especially marked in British Columbia (31%), the Prairies (31%), Ontario (19% and 20 seats), Quebec (19% and 2 seats), and Atlantic Canada (33% and 7 seats).

The Conservatives would be hit the hardest by this NDP surge, with only 109 MPs. However, they still would have more than the 97 Liberal MPs. But joining with the Liberals would give an NDP-Liberal coalition 147 seats, enough to govern with a good level of stability.

Compared to March, this is an increase of seven seats for the New Democrats and 0.2 points for the national popular vote. 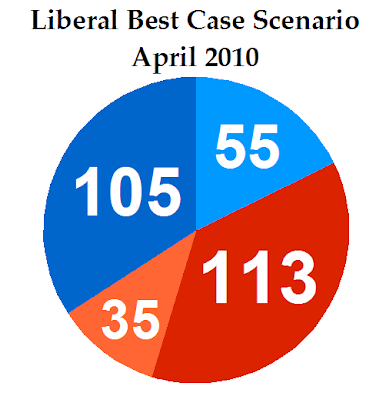 With only 29.7% support, the Liberals manage to squeak out a weak plurality of 113 MPs to the Conservatives' 105, and will need to reach out to the other parties to form government.

The Liberals' strongest performances come in the Prairies (35%), Ontario (38% and 57 seats), and Atlantic Canada (41% and 21 seats). They are still not doing well enough in the West and Quebec to give them a solid cushion over the Conservatives.

The NDP still manage a strong showing of 35 seats, but with a combined 148 MPs the Liberals and NDP would still be short of a minority, while the Bloc makes historic gains.

This is a drop for the Liberals compared to March. Their best case scenario is down 8 seats and fully 3.4 percentage points. It was a rough month. 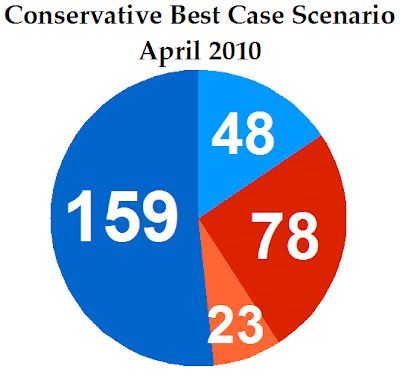 With 38.4% of the vote, Stephen Harper is finally elected with a majority of 159 MPs, barely crossing the 155 threshold.

For the Tories, this is a big gain of 11 seats over March. They only needed a 0.9-point bump to do it.

So, what we have here is a demonstration that the New Democrats and the Conservatives are in an improved position over last month. A majority is within the grasp (only) of the Tories, though things have to go very well for them to get there. Historic results are also within reach of the NDP, but this seems to lessen the likelihood of a Conservative majority. While April has shown that the NDP is strong, it also shows that the Tories require a weak NDP to get to a majority. There is conflict there.
Posted by Éric at 10:36:00 AM