EKOS's weekly poll shows the Conservatives down and the Liberals and New Democrats up. But, overall, there has been little change. 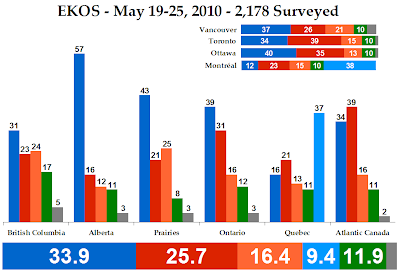 In Atlantic Canada, the Liberals have re-gained a lead with an eight-point bump to 38.7%. The Conservatives lead in Alberta with 57.1% and the Prairies with 42.7%. The NDP is up eight points in that region to 25.2%. 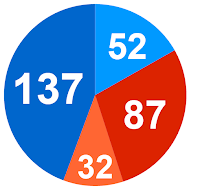 Last week's poll resulted in seats of 140 CPC, 85 LPC, 55 BQ, and 29 NDP so this poll shows small gains for the Liberals and NDP and small losses for the Conservatives and Bloc.

The polls remain to be unhelpful for anyone. The low Liberal result and the big gap would seem to be good news for the Conservatives, but at less than 34% a majority is out of their reach and would be a moral loss. The Liberals look unable to go anywhere, while the NDP seems to have topped out in 2008 and appears to be set to lose some seats. The only party who might gain is the Bloc, who should be able to take advantage of low Liberal and Conservatives results in their province.
Posted by Éric at 9:05:00 AM