The recent election in the United Kingdom has brought the concept of electoral reform back to the forefront. So, why not take another look at what proportional representation would mean for Canada?

This exercise uses this site's popular vote projections to determine the distribution of seats.

First, let's look at what would happen with the current projection in the current 308-seat House of Commons, with each region being given the amount of seats it currently has in Parliament. In other words, 106 Ontario seats, 75 Quebec seats, 36 British Columbia seats, 32 Atlantic Canada seats, 28 seats in Alberta and the Prairies each, and 3 seats in the North. 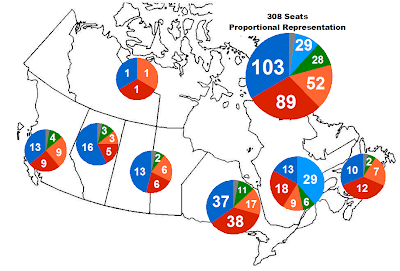 The results is the slimmest of Conservative minorities. In fact, it is highly doubtful that with only 103 seats the Conservatives could form a government without the help of another party.

Far more likely would be some sort of rainbow coalition combining the Liberals, New Democrats, and Greens (totaling 169 seats). With 141 seats, the Liberals and NDP could try to go it alone.

The Conservatives win 43 of their seats in the West and North, 37 in Ontario, 13 in Quebec, and 10 in Atlantic Canada. It would be a far more balanced caucus, and while the party would have earned 33% of the vote, it would have gotten 33.4% of the seats.

The Bloc Québécois would be seriously reduced to 29 seats, but that is 9.4% of the seats in the House with 9.4% of the vote in the country as a whole.

But it could even be more fair. Some of the provinces are over-represented in the House of Commons, and others are under-represented. So what if we went for a more equitable house, with each seat representing about 100,000 people? I've increased the number of seats to 340, and gave Ontario 132 seats, Quebec 79, British Columbia 45, Alberta 37, the Prairies 23, Atlantic Canada 23, and the North 1. 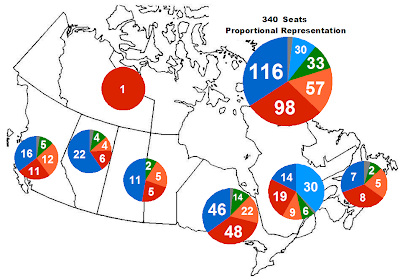 Oddly enough, the Conservatives unfairly benefit in this calculation, while the NDP and the Greens are closer to their popular vote. But we're really talking about minuscule differences.

Again, the Conservatives would be hard pressed to form a government with only 116 seats, when 170 are needed for a majority. The Liberals and NDP would total 155 together, so would require the Greens in order to get to a majority.

This kind of system would force coalitions and compromise. Arguably, that is a more democratic way to run a government and reduce the partisanship in the House. As it stands now, the parties just need to beat the other guy by a few votes in key ridings. Broad appeal is not as necessary.

And while we're thinking about the British election, if Canada had 650 seats like the House of Commons in London, a PR distribution based on my current projection would give 215 seats to the Conservatives, 188 to the Liberals, 107 to the NDP, 68 to the Greens, 61 to the Bloc, and 11 to the other parties.